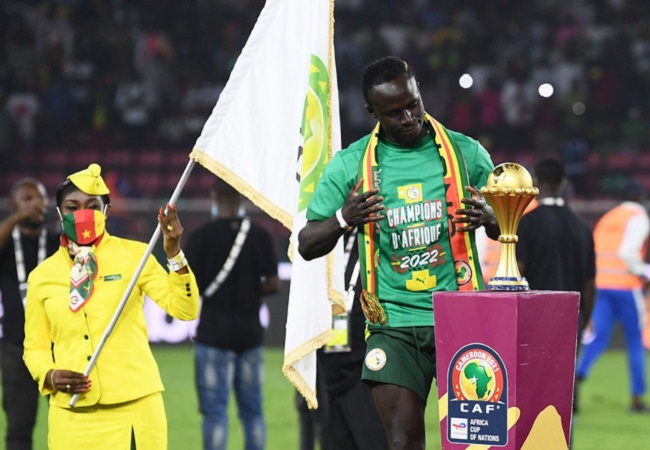 Sadio Mane’s success with Senegal at this year’s African Cup of Nations will be forever remembered with the Liverpool star to have a stadium named after him.

The Senegalses international has become his country’s hero after his decisive penalty in the Teranga Lions’ triumph over Egypt in the tense final.

Also Read : SADIO MANE : AFRICA CUP OF NATIONS (AFCON) IS THE BEST TROPHY OF MY LIFE

Mane has quickly become an icon in the west African nation, with their first-ever success at the AFCON only further underlining his talismanic status.

Now, the mayor of Sedhiou – the 29-year-old’s place of birth – has revealed that a new ground in the town will be dedicated to the superstar.

‘Sadio Mane has honoured all of Senegal, the Sedhiou region and the entire Casamance area.‘ Abdoulaye Diop said.

‘I have decided to name the Sedhiou stadium after him.

‘In doing so I wish to convey the gratitude of all the sons and daughters of the region towards him.

‘He has made all of mankind aware of Bambali and Sedhiou, the region’s main town.

‘This is a gift that Sadio Mane truly deserves.’

The stadium is now under construction and, reports say, will open next year.

Senegal’s victory unsurprisingly sparked wild scenes of celebration across the capital of Dakar, with Mane and his team-mates hailed as heroes.