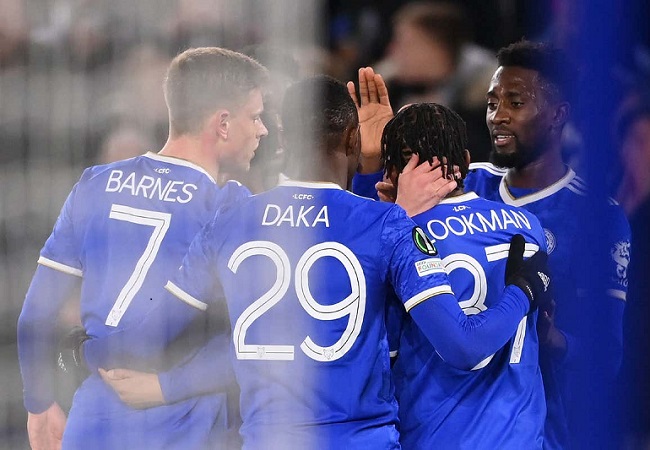 Leicester City ended a five-game winless run after thrashing Randers 4-1 in the first leg of their Europa Conference League round of 16 playoffs on Thursday. Super Eagles star Wilfred Ndidi scored his second goal of the season while his countryman Ademola Lookman assisted two goals.

Leicester City welcomed Danish side Randers to the King Power Stadium. The Foxes had not secured a victory in their last five games. And the game against their Danish opponents helped them to come back to winning track.

Also Read : EUROPA LEAGUE PLAYOFF ROUND UP : RANGERS GETS VITAL AWAY WIN

The Foxes dominated the game from the start. And they got rewarded in the 23rd minute, as Ndidi received a pass from compatriot Lookman to slam home, putting Leicester in front.

However, the Foxes were pegged back just before halftime after Hammershoy-Mistrati equalised for the visitors.

Nevertheless, Leicester returned to the second half confident as Harvey Barnes scored for Leicester city just four minutes after the break to make it 2-1. Six minutes later, Patson Daka made it three for the Foxes.

Minutes after his goal, Daka was taken off for Kelechi Iheanacho. Iheanacho did not score, but he put up a good show, with an 83 per cent pass accuracy, two dribbles and one key pass.

Lookman wrapped up his brilliant night with an assist for Kiernan Dewsbury-Hall’s 74th-minute goal, which sealed a 4-1 victory for Leicester City, their first win since the 9th of January.

Leicester City travel to Denmark for the second leg next week.