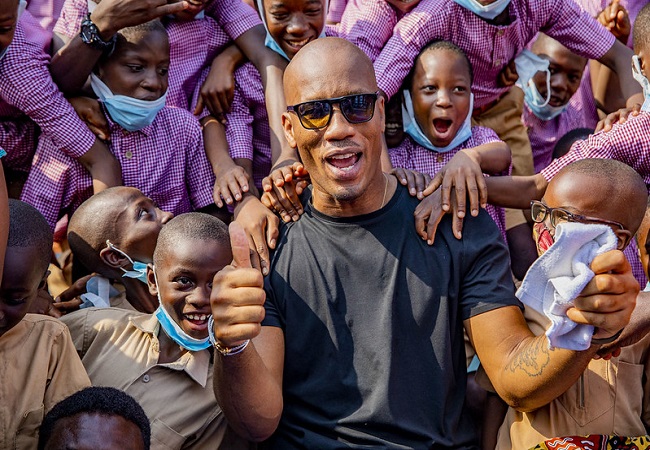 Former Chelsea legend Didier Drogba took part in the inauguration ceremony of a new state of the art sports facility for disadvantaged youth in the Ivorian town of Bingerville, just outside Abidjan

Former captain of the Elephants of Côte d’Ivoire was centre of attention as he helped launch the Giants of Africa basketball court in his native Ivory Coast.

Also read : I WANT TO CRY, SAYS DIDIER DROGBA AS MO SALAH ‘IS GOING TO DESTROY ALL HIS RECORDS

There was anticipation of intense competition as young athletes stepped into the brand-new facility and prepared to compete. These were the sights and sounds at the Boys Orphanage in Bingerville during the recent unveiling ceremony of the ‘Giants of Africa’ basketball court.

“Young people are the future of Africa. Africa is on the rise. And Africa is now. The youth population is evidence of that.” Said Masai Ujiri, founder of the Giants of Africa Foundation, speaking to a crowd of more than 300 young spectators.

Launched in 2003, ‘Giants of Africa’ uses basketball to educate and enrich the lives of African youth. The organization provides quality facilities, sports gear, and coaches to grow the game of basketball in Africa. It creates awareness and support for underprivileged children and young adults through its basketball camps. The organizers want and urge African youth to dream big.

Each summer since 2003, Ujiri’s Giants of Africa has traversed the African continent, conducting camps for boys and girls between ages 15 and 19.

The basketball court in Abidjan is the 12th of 100 courts in the Giant of Africa’s plans for the continent. It is located on the orphanage premises, which hosts 256 orphaned and disadvantaged children aged 4 to 18.

“A few years ago, I came here for charity work for the orphanage. And during our discussions, it became clear that the orphanage lacked a sports field. So, I committed to providing a first-class facility for our children to realize their dreams.

“These children here are the legends of tomorrow. And their holistic development through the construction of proper sports facilities will enable them to dream big.” Ujiri added.

For African Development Bank Group President, Dr. Akinwumi A. Adesina, investments like Giants of Africa are important seeds planted for the betterment of the future of young people in Côte d’Ivoire and Africa.

“I am thrilled to be here to encourage you in this initiative. Taking care of this cement of the future of Côte d’Ivoire is a great work of construction for the future of Africa. I pray to God that you become giants of Africa.” Adesina said.

Drogba also expressed his hopes for the future of Africa’s youth through sports. “It is an absolute pleasure for me to be here to support my friend and brother Musai Ujiri.” Said the football legend.

“His foundation is a pride for Africa, a pride for the youth. I recognize myself in these children from disadvantaged backgrounds.” He added.

Mutombo also acknowledged that sports has the power to change communities. “All these young people, their future is in our hands. If we don’t do something, their future will be meaningless.“We never had the chance to have someone reach out to us when we were kids in Congo. Today, young people, it is possible. The future belongs to you. The ground is there; take care of it. It is up to you to use it to become giants.”