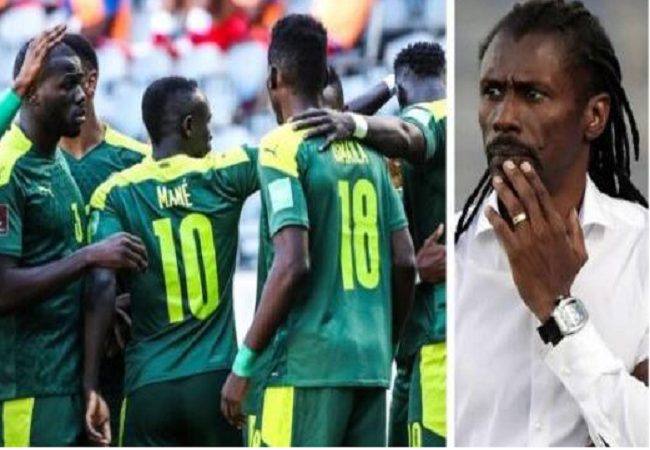 Cisse kept faith with most of the players that helped the Teranga Lions to win the 2021 TotalEnergies Africa Cup of Nations in Cameroon.

Several top players like Liverpool superstar Sadio Mane, goalkeeper Edouard Mendy of Chelsea, Napoli defender Kalidou Koulibaly and PSG star midfielder Idrissa Gana Gueye were all retained in the squad to face the team they defeated in the final of the AFCON.

Coach Cisse was forced to leave out two goalkeepers that were part of the squad that won Senegal’s first continental triumph in Cameroon last month.

Queens Park Rangers goalkeeper Seny Dieng and Alfred Gomis of French side Rennes were excluded from the team because of injuries, resulting in the recall of Kamara.

With the key players in the squad and the recall of the two players for the first-leg of the tie against the Pharaohs on March 25, Cisse said his squad is hungry for success.

“I have total confidence in my group. And I have decided to do it in continuity.” Cisse declared at a press conference on Friday insisting he expects a ‘difficult match’ against Egypt.

“Winning an African Cup is not an end in itself.” Said Cisse stressing that going to the World Cup is really the goal of his team.

“We have a lot of respect for the Egyptian team who had chances to win the final.” Insisted Senegal coach.

Kamara has already played two games with Senegal in a friendly against Morocco that they lost 3-1. And he was also in the sticks for the goalless draw with Congo in the 2021 AFCON qualifiers.

The gloves-man is in the squad together with first choice shot-stopper Mendy as well as goalkeeper Alioune Badara Faty of Casa Sports in the Senegalese top-fight.

Faty, who won the 2021 Senegal Cup, was the only home-based player in the group of 28 players at the AFCON in Cameroon.

Called up for the first time against Togo and Congo in the World Cup qualifiers last November, Faty has since been a part of the Senegal squad.

Joseph Lopy of French side Sochaux and Ibrahima Mbaye are absent with the latter injured while the defender has not been called due to the lack of playing time with the Italian club.

The Lions are seeking to complete the double over Egypt after defeating them in the final of the AFCON while the Pharaohs are eyeing a revenge.