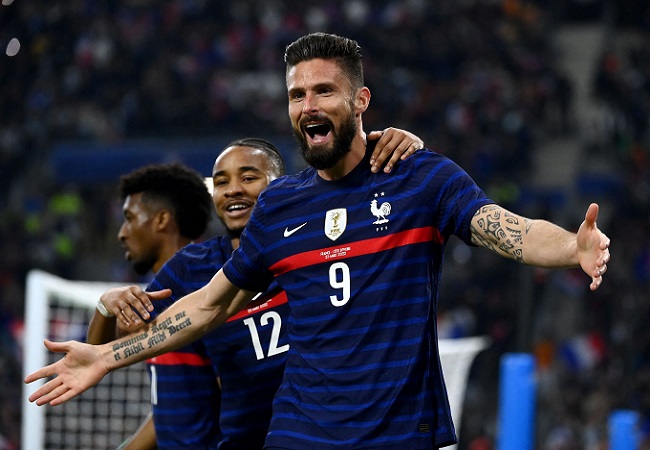 The world champions France beat Ivory Coast 2-1 in a friendly on Friday. Olivier Giroud who had not been called up since his country was knocked out in the last 16 of the European Championship last year, cancelled out Nicolas Pepe’s opener scoring his 47th international goal to move four goals shy of Thierry Henry’s all-time France scoring record before Aurelie Tchouameni wrapped up the win in stoppage time.

The AC Milan forward, who has rarely disappointed coach Didier Deschamps despite limited playing time when he was at Chelsea, was included in the squad following Karim Benzema’s injury.

He started alongside Christopher Nkunku as Kylian Mbappe sat on the bench after suffering from an ear, nose and throat infection earlier this week.

France next take on South Africa in Lille on Tuesday for another friendly.

“We had less stamina after the break. But we were rarely in danger. We’re a bit lucky to score that second goal. But that’s the name of the game.” Said Deschamps.

“This match will help us improve ahead of the summer, and most importantly for what’s coming up late this year.” Added the coach.

They got off to a shaky start. But once they found their groove threatened more than their opponents as Paul Pogba and Tchouameni bossed the midfield at a packed Stade Velodrome.

Pepe burst into the area and fired a low cross-shot from the near post that beat goalkeeper Hugo Lloris after 19 minutes as the French defence was caught napping.

It took France three minutes to react with Giroud heading home from his club mate Theo Hernandez for the equaliser.

Les Bleus continued to push and Nkunku came close in the opening half but his header went just too high. They were however rewarded three minutes into added time when Tchouameni headed his first goal from eight appearances off Matteo Guendouzi’s corner.