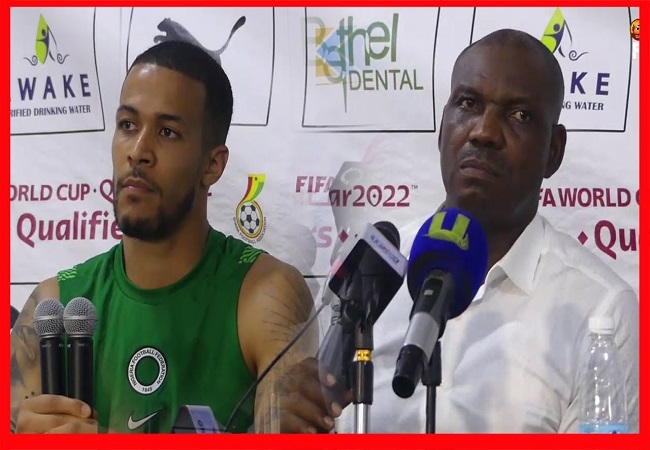 The much expected West African derby between Ghana and Nigeria ended in goaless draw at the Baba Yara Stadium on Friday for the 2022 World Cup playoff first leg. And in the post-match press conference, Nigeria’s interim manager Augustine Eguavoen refused to be dragged into the penalty incident involving two of his players and Black Stars midfielder Iddrisu Baba.

With around fifteen minutes to go, the Super Eagles were well placed to nick a win from the spot after Redouane Jiyed awarded a penalty following a handball inside the area by the Mallorca star from Oghenekaro Etebo’s effort.

The Moroccan referee changed his initial decision after spotting a foul by Kelechi Iheanacho on the Ghanaian prior to him handling the ball in the box.

Eguavoen was careful not to criticize the referee for overturning the decision to award the Super Eagles a penalty, saying he had an issue with a referee during his playing days that cost him a move to England.

A year before the 1994 World Cup, the fullback had agreed terms to join West Brom. But the deal was not completed because he was suspended for six months after falling out with a referee in Belgium.

“0-0, I think it’s still good enough. I don’t like to speak about referees. Because I was suspended at some point in time in my career.

“I had a chance to go and play in England. As a player, I had it rough with the referee for bad decisions. And I was suspended for a very long time. So referees, I just leave them to their fate.” Said Eguavoen.

The Super Eagles will be hosting the Black Stars at the Moshood Abiola National Stadium, Abuja on Tuesday, March 29, with the winner over both legs earning one of Africa’s five tickets to the 2022 World Cup.