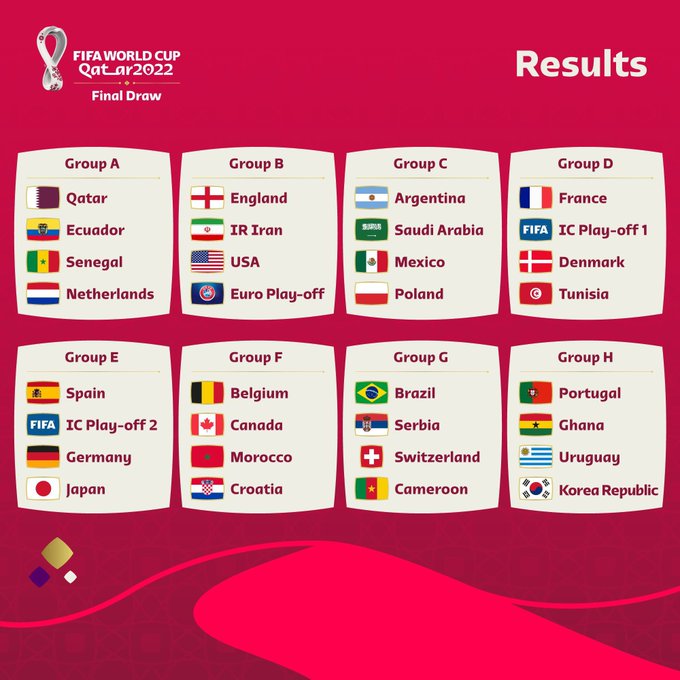 Africa champions Senegal was drawn in Group A of ahead of the FIFA 2022 World Cup in Qatar.

The Teranga Lions who booked their ticket to the mundial riding on the back of Egypt, will play against hosts, Qatar, Ecuador and The Netherland

The memory of the 2010 FIFA World Cup between Ghana and Uruguay will ignite again in Qatar.

Luis Suarez used his hands to stop a goal bound ball in the round of 16 and when a penalty was awarded, Asamaoh Gyan failed to score as the South American team later won the game.

Read Also:Qatar 2022 Draw: All You Need To Know Ahead Of Friday Draws

The Black Stars of Ghana was handed a daunting group as they will play against Uruguay, Portugal and South Korea in Group H.

the Carthage Eagles of Tunisia will play against World Cup champions France, Denmark and the winner of the Asia Intercontinental Playoff in Group D.

Morocco will square up against Russia 2022 finalists, Croatia and the Red Devils of Belgium who finished as second runners up in Russia as well as Canada in Group F.

The Indomitable Lions of Cameroon will face Brazil, Switzerland and Serbia in Group G.