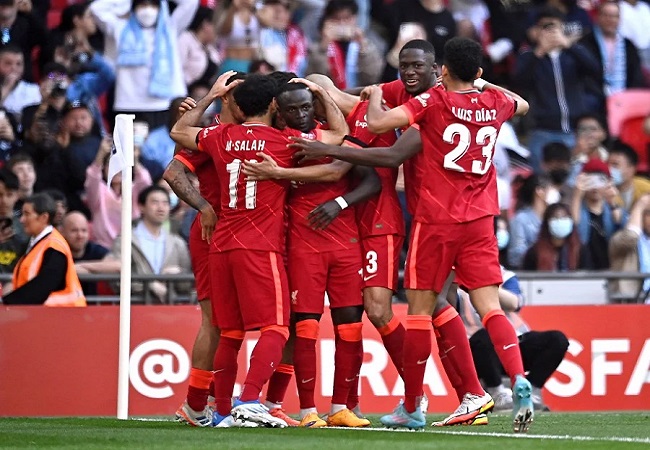 Unlike last week when City started fast and bright, Liverpool were dominant from the off. The Reds took the lead inside 10 minutes, Konate rising to powerfully head home Andy Robertson‘s corner.

And it was 2-0 inside 20 minutes when Sadio Mane pressed City keeper Zack Steffen inside the six-yard box. It was something Ederson had got away with last week and Mane pressured perfectly this time.

It was to get even better before half-time, with Mane volleying past Steffen from the edge of the area after an absolutely superb passing move ended with Thiago‘s chipped pass out to the Reds’ No.10. A sensational goal and incredible scenes going into the break.

City came out faster after the break and pulled one back within 70 seconds of the restart when Jesus got in behind and eventually teed up Jack Grealish. Liverpool were caught napping.

From there, the game got more scrappy and eventually Liverpool restored some dominance.

City midfielder Fernandinho was finally booked for a wild lunge on Keita, it could have been a straight red and should have been a second yellow after two fouls in the first half weren’t punished.

A huge save from Alisson in the 70th minute denied Jesus and kept the gap at two goals. It was another wake-up call for Liverpool’s defence.

At the other end, Salah should have restored the three-goal lead when Diaz pressed and Zinchenko slipped. But the Egyptian’s chipped shot on his right foot went into the side netting.

Liverpool gained more control in the final stages, looking to see out the game and reach their first FA Cup final for 10 years – while also ending City’s treble hopes.

It should have been more comfortable than it eventually was. But Mahrez got past Robertson in the final minute and Silva tucked home for 3-2.

Liverpool were hanging on, with the four minutes of stoppage time the nerviest of the season. The final whistle was met with relief, to say the least.

The Reds will face either Chelsea or Crystal Palace in the final on May 14.