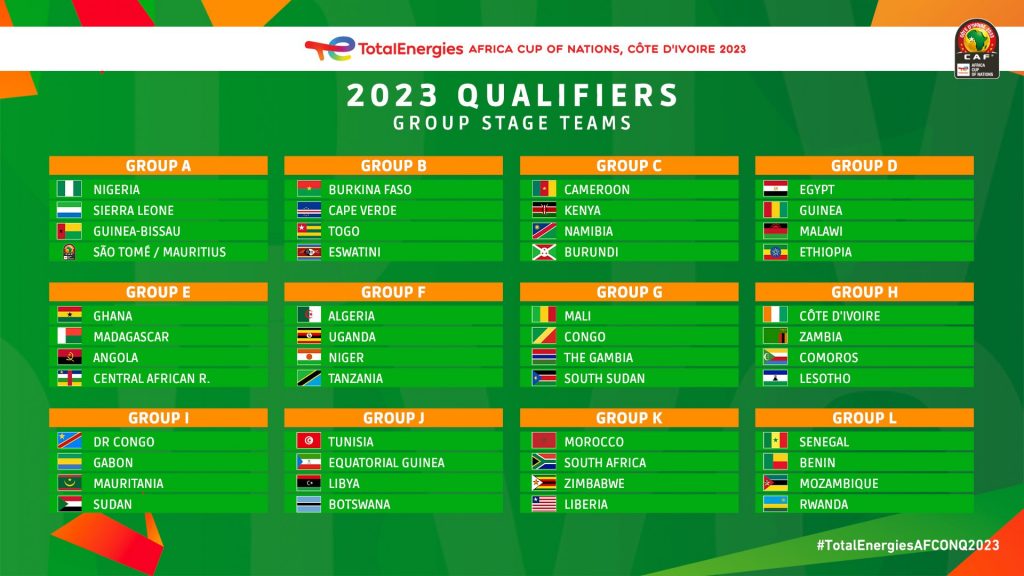 Nigeria Super Eagles have been drawn in Group A of the TotalEnergies Africa Cup of Nations, Cote d’Ivoire 2023 qualifiers.

The draws which was held on Tuesday evening in Johannesburg, South Africa, set the tune for the race to who will be playing in  Côte d’Ivoire come 2023.

Senegal, the defending champion, has been placed in Group L, alongside Benin, Mozambique, and Rwanda.

Nigeria opponents in the group are Sierra Leone, Guinea-Bissau and the winner in the game between Mauritius and Sao Tome.

Group H includes hosts Côte d’Ivoire, Zambia, Comoros, and Lesotho. Along with the hosts, only one team will qualify from this group.

Comoros, who were one of the surprise presents at the postponed 2021 showpiece in Cameroon, are hoping to qualify for a second time.

Losing finalists from the 2021 showpiece Egypt have meanwhile been drawn in Pool D and Mohamed Salah will fancy another battle against club teammate Naby Keita as they have been drawn with Guinea, Malawi and Ethiopia.

There will be several derbies as well with East African rivals Uganda and Tanzania drawn together again, and they will face off in Group F together with 2019 champions Algeria and Niger.

Uganda and Tanzania faced off in the qualifiers for the 2019 showpiece where they drew 0-0 in the first leg in Kampala and Tanzania winning 3-0 in Dar es Salaam.

Tanzania also faced Algeria at the subsequent tournament in Egypt, where they suffered a 3-0 defeat.