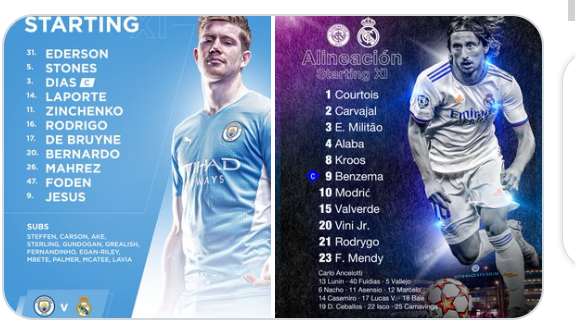 On Tuesday, April 26th, Manchester City and Real Madrid will face off in the first leg of the UEFA Champions League semi-final.

City are anxious to make apologies after losing in the final last season, but the 13-time European champions stand in their way.

In the 2015/16 season, these two teams met in the semi-finals, drew 0-0 in Manchester before Real Madrid advanced to the final thanks to Fernando’s own goal at the Santiago Bernabéu, where they defeated city rivals Atlético on penalties.

In 2019/20, Pep Guardiola’s team avenged that loss by defeating the Merengues 2-1 away and then at home in the round of 16, but the stakes are considerably bigger this time.

Here is how both teams starting XI