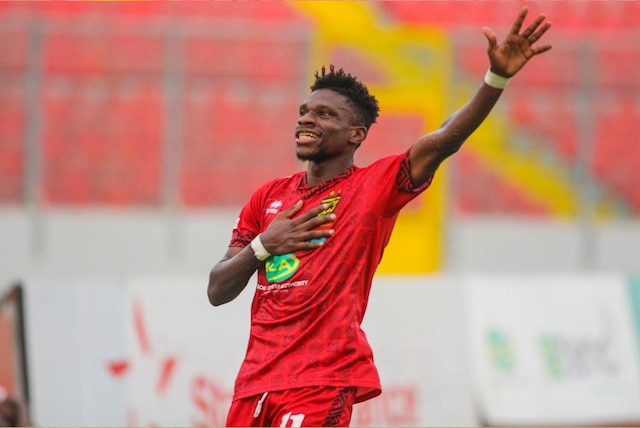 Asante Kotoko goal posher Frank Mbella Etouga is believed to be in the viewfinder of LaLiga giants Atletico Madrid and four other European top clubs.

The 20-year old Cameroonian centre-forward shows mind-blowing figures in this ongoing season with the Porcupine Warriors.

By scoring again on Saturday against WAFA, Etouga has now netted 18 goals and provided 2 assists in 28 league appearances. The highest tally for a player in Kotoko history.

Read more : Moses Simon on target as Nantes holds Lens to a draw

And his stellar performances gained him attraction from above with top clubs showing interests in signing him.

According to reliable Ghanasoccernet, LaLiga outfit Atletico Madrid have inquired about Mbella Etouga for a possible move next season.

However, the Colchoneros are not the only suitors of the forward as Serie A defending champions Inter Milan are also in the race to sign him.

In addition, the former AS Fortuna du Mfou (Cameroon) player is also in the radars of German side Bayer Leverkusen who are recongnized for their capacity in helping top talents grow.