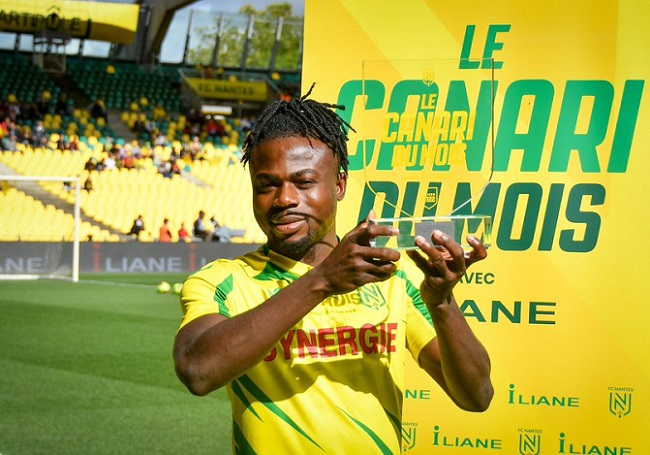 Super Eagles winger Moses Simon has been named in L’Equipe’s Team of the Week for the French Ligue 1 matchday 35 after his excellent display at RC Lens.

Simon scored both goals – his fifth and sixth of the season – to help Nantes secure a 2-2 draw in front of over 36,700 fans at the Stade Bollaert-Delelis.

Also Read : MOSES SIMON ON TARGET AS NANTES HOLD LENS TO A DRAW

Aside from his goals, the Nigeria international had 21 touches, struck three shots, and won two of his five duels to receive the highest Sofascore rating of any player on the pitch.

And Nantes have taken to their official website to celebrate Simon’s inclusion in L’Equipe’s Team of the Week, alongside PSG’s Kylian Mbappe in the attack.

The Nantes’ record books also stumbled before Simon, with his 14-goal contribution (six goals, eight assists) making him the first Canary to be involved in 10 or more goals in three consecutive Ligue 1 seasons since the late Emiliano Sala.

With six league goals this term, Simon has also matched his best scoring campaign in Europe’s top five leagues, which he set last season across 33 matches. The 26-year-old has three more games to beat that tally.

Furthermore, Nantes have nominated the Super Eagles star – alongside two others – for the player of the month award, following his brilliant performances across April.

Simon grabbed three goals and an assist in five Ligue 1 matches in the month under review. The former Gent ace won the Nantes best player of the month in the first two months of the campaign.