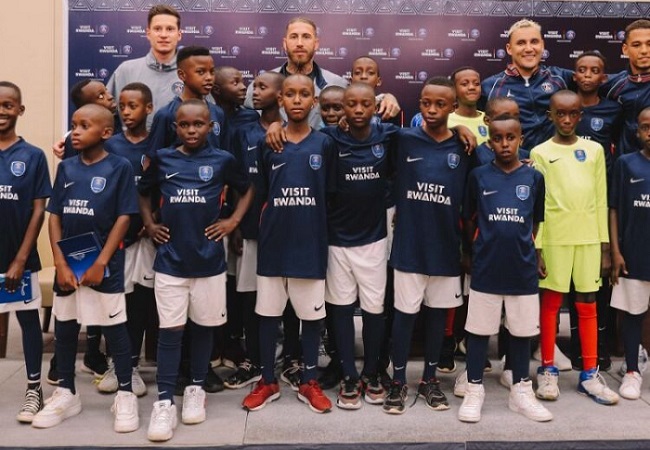 Paris Saint-Germain stars Sergio Ramos, Keylor Navas, Thiro Kerler and Julian Draxler have revealed that they had a wonderful experience during their visit to Rwanda. And they have promised to recommend other players to visit the country. The football legends too pledged to visit again in the future.

The quartet concluded a three-day visit on Monday in Rwanda which was part of the French football giants’ partnership deal with Rwanda through the Visit Rwanda campaign.

It was the first visit by any PSG player since the deal was signed in 2019.

During their stay, the players trekked different parts of the country including Akagera and Volcanoes national parks where they were able to visit Gorillas. An experience they described as ‘beautiful‘.

“We are delighted to have visited Rwanda which is a beautiful country. We got the opportunity to meet the majestic gorillas, and also visited other places. Hopefully we will come back again.” Former Real Madrid captain Sergio Ramos said.

“I’ve enjoyed everything in Rwanda since my first day. And I definitely would wish to come back in the future.” Goalkeeper Keylor Navas noted.

“We came to Rwanda with the curiosity to learn about the country. I have to say I was inspired by how fast it has bounced back.” Midfielder Julian Draxler said.

Rwanda and the French Football giants signed a three-year sponsorship deal in December 2019.