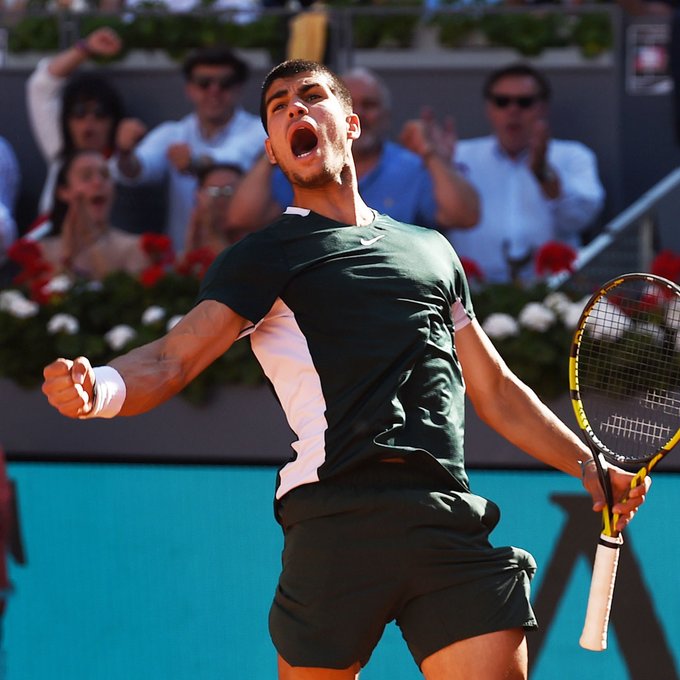 Carlos Alcaraz made history becoming the first man ever player  to beat Nadal and Djokovic back-to-back on clay at the  ATP Tour legends at the Mutua Madrid Open on Saturday.

On Manolo Santana Stadium, the Spanish sensation followed up his quarter-final victory over Rafael Nadal with a spectacular performance.

He recovered from the disappointment of losing a first-set tie-break to complete the biggest win of his career by Pepperstone ATP Ranking against World No. 1 Djokovic.

Alcaraz has had a fantastic 2022 season, winning his first Masters 1000 title in Miami and breaking into the Top 10 of the Pepperstone ATP Rankings for the first time.

With back-to-back victories over Nadal and Djokovic in Madrid, he now has a six-match winning run against Top 10 opponents, indicating that the 19-year-old has the ability to consistently compete with the best on Tour.

In the pair’s first ATP Head2Head clash, Alcaraz blasted 51 winners to Djokovic’s 24 as his aggressive style and persistent use of drop shots caused Djokovic significant trouble.

Under duress, Alcaraz saved five of the six break points he faced, while Djokovic saved eight of ten, as both players relied on huge serves to get themselves out of difficulty.

With the victory, the Spaniard becomes the first player to defeat both Nadal and Djokovic at the same clay-court event, and improves his season record to 27-3.

This matches him with Stefanos Tsitsipas for the most tour-level victories in 2022, however the Greek can advance if he beats Alexander Zverev in his semi-final on Saturday night.

Alcaraz got off to a fast start at the Caja Magica, just like he did against Nadal in the quarter-finals on Friday.

To the pleasure of his adoring home crowd, he trapped Djokovic to the back of the court with a bombardment of pounding forehands and broke in the first game with an angled backhand pass.

Djokovic was adamant in his response. Djokovic won 21 consecutive games on serve after falling behind 40-15 in the third set to recapture the break in the eighth game.

He extended that momentum into the first-set tie-break, establishing an unassailable 5/1 advantage.

A fascinating second set with few extended rallies seemed destined for a tie-break but Alcaraz broke and forced a deciding with a stunning return game at 6-5.

The Spaniard’s drop shot improved as he pulled Djokovic forward more regularly, a strategy that brought Alcaraz level when he angled a brilliantly placed winner past the Serb on set point.

In the deciding set, Alcaraz looked the more threatening player, with Djokovic fending off break points breaks in three of his service games.

At 5-5, the Spaniard let a match point slip away as Djokovic’s reliable delivery continued to deliver at crucial moments, but Alcaraz was unfazed in the tie-break, holding fast for a commanding victory.

The Spaniard’s superb Conversion and Steal ratings reflect his ability to score points whether he was on the attack or defence.

Alcaraz is just one win away from winning his second Masters 1000 title of the year.

The Spaniard now anticipates his title encounter against defending champion Zverev on Sunday.