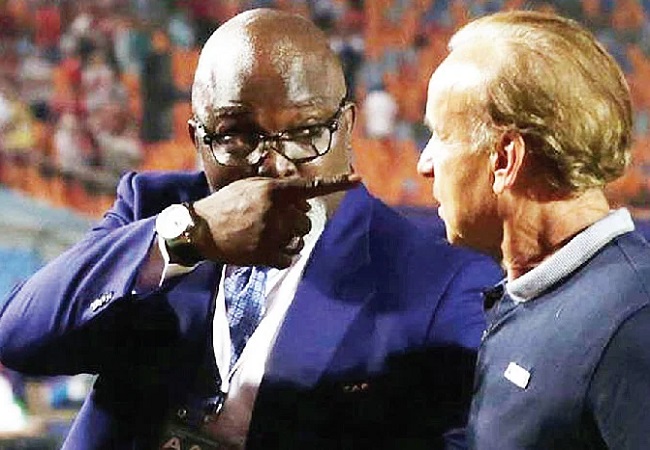 Nigeria Football Federation – NFF President, Amaju Pinnick has given the federation’s position regarding the ruling of the FIFA over the sacking of Gernot Rohr as the Technical Adviser of the Super Eagles.

In a ruling by the FIFA players’ status chamber, the football-governing body awarded Rohr $377,879.46 after deciding that his petition was partially correct as the German gaffer petitioned FIFA for his out-of-contract sacking, seeking a total of £1 million in compensation.

FIFA also instructed the NFF to pay Rohr his claim within 45 days or risk further sanctions, including a restriction on receiving a percentage of development funding.

NFF President Pinnick, however, is convinced that Rohr did not win the case, as portrayed by a section of the local media.

Pinnick confirmed that the NFF paid Rohr some money before the coach’s contract was terminated. And the federation would look to convert that payment to the FIFA fine.

“That’s not the true position.” Pinnick said of the ruling in a chat with the Punch.

“We are still debating whether to go to CAS and tell them to convert that money we paid him to what FIFA wants us to pay him.”Continued NFF President.

Nigerian FA sacked Rohr in December after leading the Super Eagles more than five years at the seat.

The NFF and the Sports Ministry are yet to get a new head coach for the Super Eagles with less than a month to Nigeria’s first Afcon 2023 qualifying match against Sierra Leone.

Also Read : GERNOT ROHR TO TAKE OVER EAGLES OF MALI JOB IN THE COMING DAYS

Rohr has also been without a job since his dismissal, with the former Girondins Bordeaux manager failing to land the Mali national team coaching job after being considered the favourite for the role.