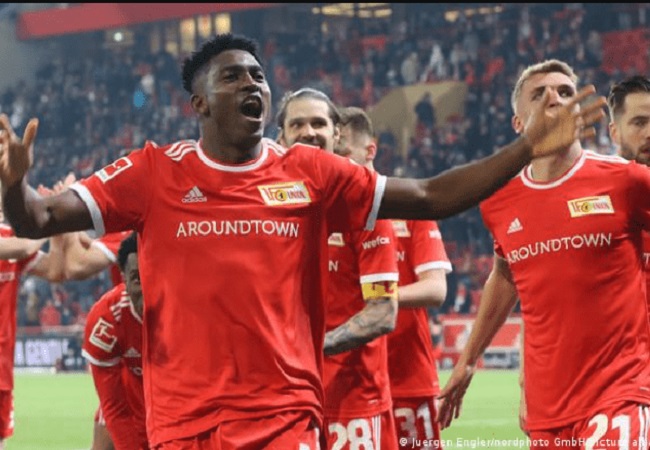 Super Eagles forward Taiwo Awoniyi hit his 14th and 15th league goals to power Union Berlin to an excellent 3-2 victory over Bochum at the Alte Foersterei in the German Bundesliga season final.

Needing a win to stand a chance of overtaking Freiburg and claim the Europa League spot, Union Berlin raced to a two-nil lead within the opening 25 minutes.

Grischa Proemel gave the Iron Ones the lead after just five minutes. And Awoniyi converted from the penalty spot twenty minutes later to get the hosts cruising.

But goals from Simon Zoller and Eduard Loewen after the break stunned Union, dragged Bochum back in the tie and sent Urs Fischer’s men back down to sixth on the league table, even with Freiburg losing at Bayer Leverkusen.

Awoniyi sprang up as a hero reacting first to a loose ball and turning it home for the winner in the 88th minute.

The Super Eagles striker would not stop celebrating with the fans singing his name in the stands, forcing the referee to book him.

More importantly, Awoniyi scored Union Berlin’s first goal of the season in the 1-1 draw against Bayer Leverkusen at the same stadium.

Incredibly, he has also claimed the Iron Ones’ last goals of the campaign to earn a thrilling victory that seals their place in next season’s Europa League.

Awoniyi’s latest brace may, however, be his last goals for Union Berlin as his agent has refused to rule out a return to the English Premier League in the summer for the former Liverpool signing.