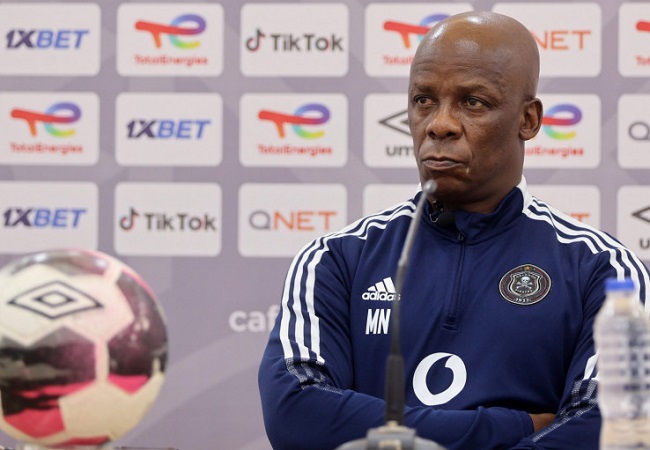 Africa will come to a standstill tonight when South Africa’s Orlando Pirates face Morocco’s RS Berkane in the 2021/22 CAF Confederation Cup final. The big clash will take place at the Godswill Akpabio International Stadium in Uyo, Nigeria for 19:00 GMT as kick-off time.

While things might not be going according to plan for the Buccaneers in terms of their domestic campaign, the Mayfair side have produced a number stunning performances on the continent.

They’ll need one last incredible performance should they wish to go on and lift their first CAF Confederation Cup title.

Ncikazi says even though Berkane are coached by the experienced Florent Ibenge, their knowledge of Moroccan sides will help them triumph in the game.

“A big match between two teams … a very big clash.” The Orlando Pirates coach said at the pre-match press conference in Uyo on Thursday.

“It will be a big match against Ibenge, who we consider a good coach. And we will try to represent our country, South Africa well. And I expect a good match.

“We know the atmosphere and the nature of the matches against Moroccan clubs. We have faced some of them before. It will be a tough match, and we hope to win.

The Orlando Pirates trainer revealed that they will play to their strengths and will not change their style of play against the physical Moroccans.

“We will play the same way we are used to. And RS Berkane is a team that has great physical potential.” Ncikazi added.