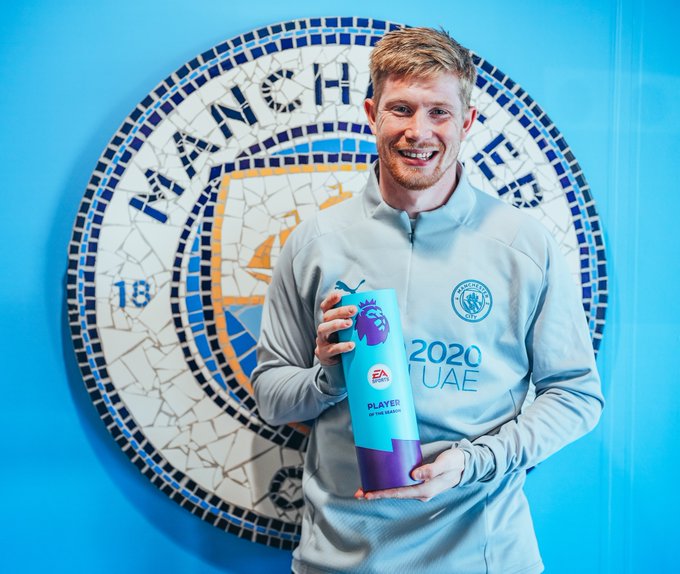 The Premier League, the English top flight’s organizer, announced the news on Twitter on Saturday.

De Bruyne joins the likes of Thierry Henry, Cristiano Ronaldo, and Nemanja Vidic as the only players to win the accolade multiple times.

Read Also: De Bruyne explains why he and Van Dijk walked to each other after City vs Liverpool clash

The 30-year-15 old’s goals and seven assists in 29 games have seen him beat out Mohamed Salah, Heung-min Son, Bukayo Saka, Joao Cancelo, Trent Alexander-Arnold, Jarrod Bowen, and James Ward-Prowse for the title, which he previously won at the end of the 2019/20 season.

If De Bruyne and Foden can beat Aston Villa at the Etihad Stadium on Sunday, they will win their fourth Premier League title.

If Wolverhampton Wanderers lose, Liverpool might win their second title in two years if they make a mistake.

De Bruyne began his career at Genk, where he was a key member of the team that won the Belgian Pro League in 2010–11.

He joined English club Chelsea in 2012 but was only given limited playing time before being loaned to Werder Bremen.

He joined Wolfsburg for £18 million in 2014 and quickly established himself as one of the top players in the Bundesliga, playing a key role in the club’s DFB-Pokal victory in 2014–15.

De Bruyne joined Manchester City for a club-record £54 million in the summer of 2015. With the club, he has won three Premier League crowns, five League Cups, and one FA Cup.

He played a key role in Manchester City becoming the first Premier League team to reach 100 points in a single season in 2017–18.

De Bruyne was named Player of the Season in 2019–20 after tying the record for most assists in a Premier League season.