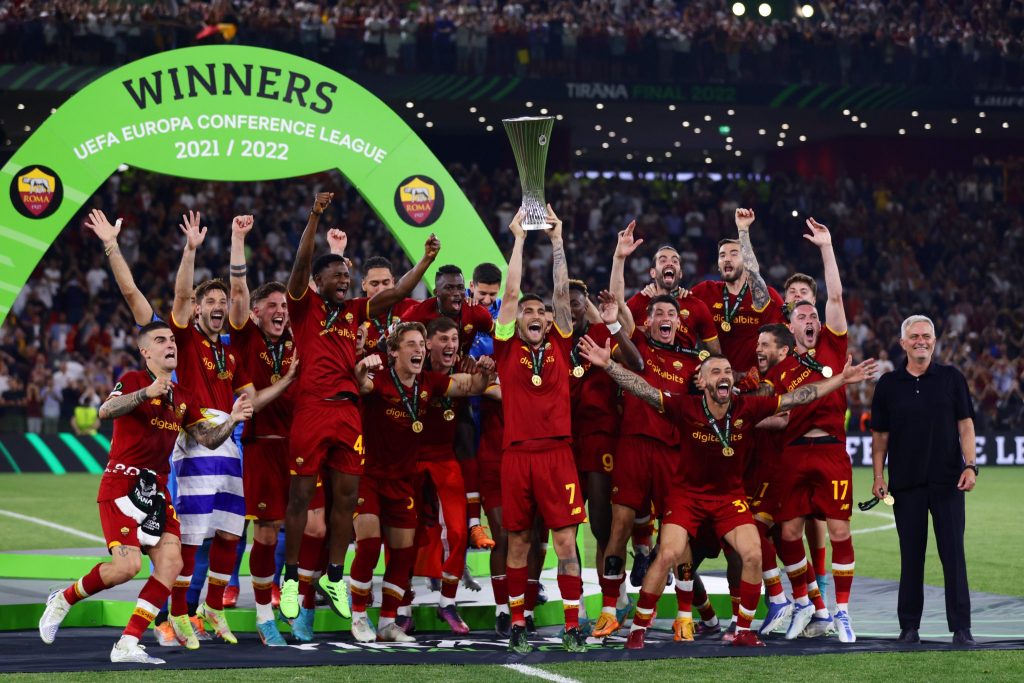 After Nicolo Zaniolo chested down Gianluca Mancini’s lofted pass and beat goalkeeper Justin Bijlow with a beautiful flick, Jose Mourinho’s first season in command of the Italians finished with a trophy.

Mourinho is the first manager to win all of Uefa’s major European titles, having won the Champions League, Europa League, and Uefa Cup.

Last October, the Portuguese were chastised when Roma were humiliated 6-1 by Bodo/Glimt in the group stage in Norway.

However, the former Chelsea and Manchester United manager’s spotless record in European finals maintained with this victory, as he now has five wins in five finals.

Feyenoord’s campaign began in the qualifying rounds in July, and they were denied an equaliser when Rui Patricio turned Tyrell Malacia’s effort over the bar, just moments after Mancini hit his own post while attempting a clearance.

At the final whistle, Mourinho was surrounded by his backroom staff, as Roma’s players celebrated in front of their travelling support in Albania.

This was Mourinho’s first title since Manchester United won the Europa League in 2017.

Chris Smalling was a member of the United team that beat Ajax in Stockholm five years ago, and the 32-year-old defender was named man-of-the-match to help Roma win their first title since 2008.

Smalling produced a couple of key blocks in the early parts of the second half, when Feyenoord were at their best, and he did an excellent job of keeping competition top scorer Cyriel Dessers quiet.

Tammy Abraham thought he was clear until he was thwarted by Marcos Senesi, who got away without being arrested.

Since arriving for £34 million from Chelsea last August, Abraham has had a fantastic debut season in Italy.

He was unable to add to his 27 goals for the season, but he leaves with a title and a return to Gareth Southgate’s England side.