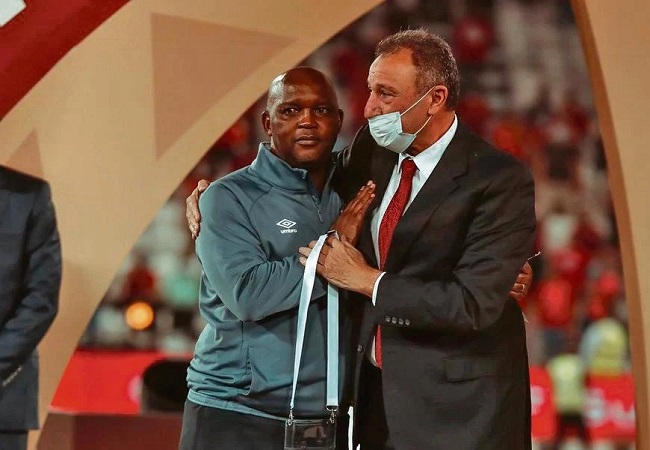 Al Ahly president Mahmoud El Khatib and his board have arranged meetings with coach Pitso Mosimane with the first having taken place on Tuesday to plan for forthcoming assignments.

The president is meeting the celebrated South African coach days after the Egyptian side failed to defend the CAF Champions League trophy following a 2-0 loss to Wydad Casablanca in the final.

The defeat and domestic league struggles have cast questions on the future of the former Mamelodi Sundowns coach.

Al Ahly have since announced that El Khatib held the first meeting with Mosimane on Tuesday evening vie video conferencing.

“The meeting saw the presence of Al Ahly Football Company board, headed by Yasseen Mansour, Hossam Ghaly, the club’s board member, and the club’s planning committee members, Mohsen Saleh and Zakaria Nassef.

“During the meeting, they discussed some points regarding the first team’s preparations for the upcoming period,” the club website reports.

Another meeting between the board and Mosimane is scheduled for Friday when Mosimane arrives from Morocco where he was attending a course.

Some Al Ahly former players such as Taha Ismail have called for Mosimane to be sacked.