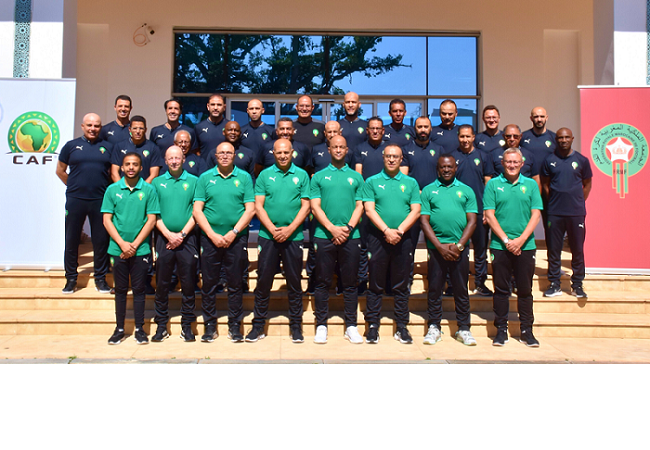 The Confederation of African Football (CAF) has taken yet another giant step towards advancing the standard of African football, through its ongoing strategy of taking African football to the next level as 23 top African coaches participate in the historical CAF Pro License.

The governing body of African football is currently hosting 23 of the best managers on the continent in the final module of the inaugural CAF Pro License coaching diploma in Rabat, Morocco.

This is done in partnership with the Royal Moroccan Football Federation (RMFF).

A first of its kind for African football, the highest ranking qualification in CAF’s coaching education structures sees the most highly respected football minds on the African continent on course to earning the highest coaching badge by CAF, which is equivalent to any high ranking coaching qualification globally.

This will be first group of graduates when the final module of the course officially comes to an end on Saturday, 11 June after a lengthy journey that started back in 2018.

The CAF Pro License is strictly reserved for coaches who are actively coaching at a professional level, have demonstrated a certain level of high performance and achievement and also acquired a CAF A License or equivalent qualification recognised by CAF.

Also part of the group, but not present in this course is TotalEnergies Africa Cup of nations AFCON winning coach and former Senegalese captain, Aliou Cisse.

The journey has not been easy for the 23 participants, who are at the final stretch of the course that demanded a high level of participation in the form of assignments and reporting during what has been a very taxing season for some of them in their respective clubs and national teams.

Explaining to CAFOnline.com on the value and importance of this course, CAF’s Director of Development Raul Chipenda said this marked a significant milestone for CAF’s ultimate goal of elevating African football to greater heights.

“Africa should take pride and celebrate this important milestone that we are about to achieve. We have assembled 23 of the best football managers on the continent currently, who are about to graduate and take the African game to even greater heights thanks to knowledge acquired over the last four years.” Said Chipenda.

“We must also extend our gratitude to the visionary leadership of CAF for making such a course possible. The knowledge that these coaches have acquired, accompanied by their experience can only bode well for the future of African football.” He added.