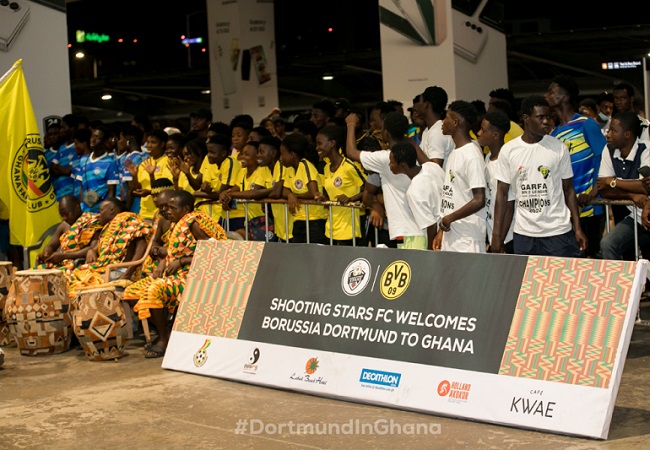 The Borussia Dortmund Legends are back together again – 906 days after they last went on tour. Having previously played games in Thailand, Hong Kong and Brazil, Ghana is the next stop. And the West African country is first for the BVB Legends since corona. The team will be in the country of the Black Stars of Otto Addo from 8 to 12 June.

“Even the reunion at the airport was very emotional. We can finally be on the road together again. And I’ll finally be back on the football pitch with my black and yellow friends on Saturday.” Said Dede with a beaming smile.

The team was given an enthusiastic welcome by several hundred fans after their arrival at the airport in Accra late in the evening. All the players and support staff were presented with scarves in the national colours. But the real highlight was the country’s traditional singing, dancing and drumming, which was filmed by the wide-eyed arriving contingent on their smartphones.

The stadium in Accra is home to two clubs: Accra Hearts of Oak and Great Olympics. It is also the home of the Ghanaian national team, which will be coached by ex-Borussia Dortmund player Otto Addo until the World Cup. On Saturday (11 June, kick-off at 19:30 CET), the BVB Legends will travel to the venue to take on the African Giants, whose ranks include Champions League winner Abedi Ayew Pele, former Bundesliga players Charles Akonnor and Samuel Kuffour, and former Ghana international Asamoah Gyan.

“Borussia Dortmund have been able to sign some excellent footballers from Africa in recent decades, such as Otto Addo, who is still involved as a coach for talented youngsters at BVB today, Pierre-Emerick Aubameyang, Victor Ikpeba, Ibrahim Tanko and Mo Zidan. We’re delighted to be able to thrill many of our fans by making this visit to Africa.” Said Carsten Cramer, Managing Director of Borussia Dortmund.

Ghana squad for the historic event: