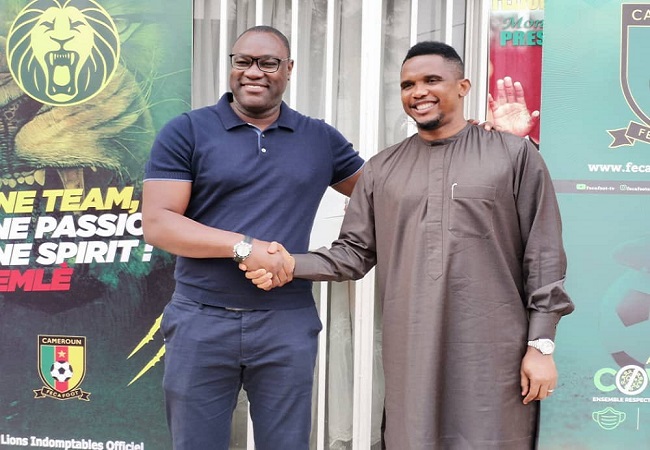 Former Cameroonian international Henri Patrick Mboma Dem has been appointed Ambassador of the Indomitable Lions following the signing of his contract at the headquarters of the Cameroon Football Federation in Tsinga, Yaounde on Friday.

Mboma has been constantly present in the indomitable lions delegations for their recent games, since his one time teammate Samuel Eto’o Fils was voted FECAFOOT president. In the company of Eto’o and other top football officials in the Country, the former Paris Saint-Germain forward signed a contract that will see him sell the indomitable lions brand for the next four years.

For his new role as Ambassador of the indomitable lions, Patrick Mboma is expected to accompany the team in their travels, provide valuable advice to the players and coaches and also work with the marketing department of the Cameroon national team.

“In the vision that I proposed to the delegates that accepted to give me their confidence last December 11, one of the things was to bring back all those who served Cameroon Football.” FECAFOOT president Samuel Eto’o said during the contract signing.

“One of the greatest Cameroonian footballer is Mboma. I had great honor to play with him for quite a good time. And today he will accompany our team, and bring some experience, leadership and his advices to our coaches.

“Welcome back home and I think in the course of these four years, we will win many trophies.” Eto’o added.

“I am honored for the consideration. The mission that awaits is to carry the voice of the federation, the voice of Cameroon football.” The one time African Footballer of the Year said.

Since taking office in December 2021 as FECAFOOT president, Eto’o has given key positions to his former teammates. Rigobert Song Bahanag was appointed the lions coach, with Augustine Simo part of the coaching staff.

“Since six months, lots of things have changed. And we will want to add more value to Cameroon Football.” Mboma said of Eto’o’s first six months in office.

During Mboma’s nine years international career with the indomitable lions of Cameroon, he won two TotalEnergies AFCON trophies in the years 2000 and 2002, an Olympic Gold medal in Sydney 2000. And he was voted African footballer of the year 2000.