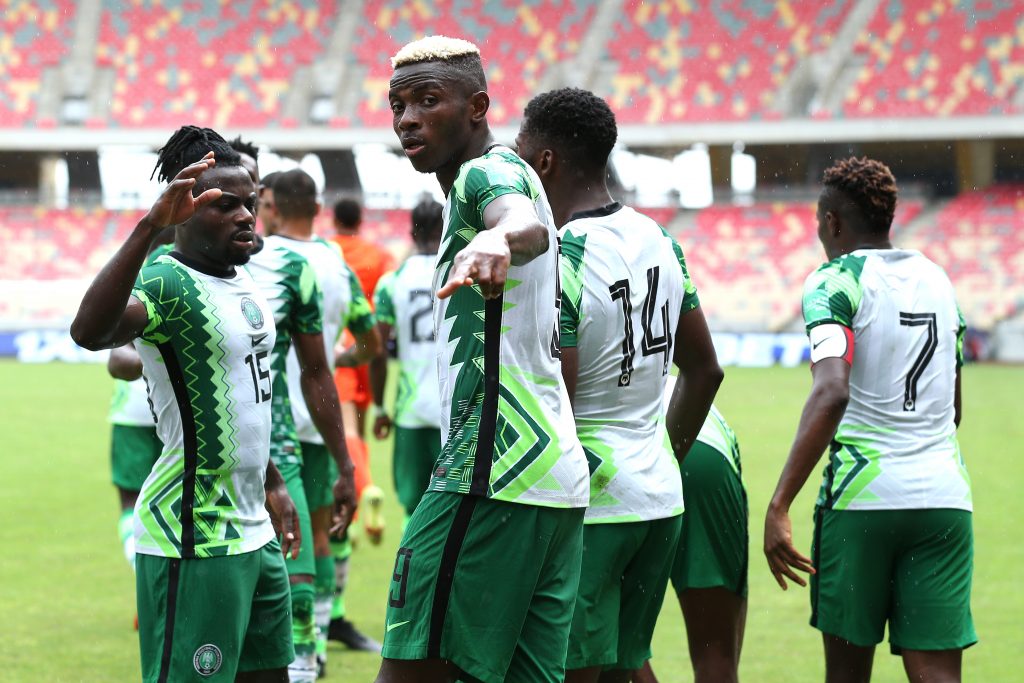 The Super Eagles ran riot over a feeble Sao Tome and Principe team, winning 10-0 at the Adrar Stadium in Agadir, Morocco, in their second Group A game of the 2023 AFCON qualifiers on Monday.

It is officially Nigeria’s biggest ever football victory, and it is the second time the country has scored ten goals in a game, following a 10-1 win over Dahomey (now the Benin Republic) on November 28, 1959.

Victor Osimhen, who scored four goals and added two assists, was the star of the Agadir show.

Terem Moffi and Ademola Lookman scored the Eagles’ first goals, with the former scoring a brace and the latter, in addition to scoring a goal, also providing an assist.

Simon took the captain’s armband in the game against Sierra Leone in Abuja on Thursday when William Troost-Ekong was injured. He also scored and assisted.

The win propelled the Eagles to the top of Group A, and they will be back in action in the qualifiers in September when they play Guinea-Bissau in their third match.

Sierra Leone will host Guinea-Bissau in the other Group A match, which will take place later on Monday.

In the third minute, the Eagles had their first shot on goal as Osimhen raced towards goal but was cautioned for offside.

In the 10th minute, Osimhen made no mistake, heading in Simon’s cross from the left to put the Eagles ahead 1-0.

So Tomé had their first attempt in the 15th minute, but Francis Uzoho made a wonderful save.

In the 22nd minute, Osimhen almost scored his second goal of the game, heading from close range from a corner from Moses Simon, but the keeper made a fantastic stop on the line.

Simon made it 2-0 in the 28th minute when he slammed in Osimhen’s assist from a long pass from Ola Aina.

So Tomé surged forward and had an opportunity through Luis Leal in the 33rd minute, but his shot sailed wide.

On 36 minutes, Terem Moffi rounded the keeper but his intended pass to Osimhen was intercepted, allowing the Eagles to extend their lead.

Moffi made it 3-0 with two minutes left in the first half, sprinting on to a through cross from Osimhen, beating his opponent and sliding into the net with a left-footed low drive.

On 48 minutes, Osimhen scored the fourth goal, heading a wonderful cross from Lookman into an empty net.

Lookman had a wonderful chance to score the fifth goal in the 53rd minute after exchanging passes with Moffi, but his attempted curler sailed wide of the target.

The Eagles pressed for further goals and were rewarded in the 55th minute when Etebo scored a fantastic free-kick.

On 57 minutes, Osimhen thought he had completed his hat-trick after scoring off a lovely feed from Sanusi, but his goal was disallowed for offside.

A minute later, the Eagles made two substitutions, replacing Simon and Aina with Ahmed Musa and Shehu Abdullahi, respectively.

Moffi scored his second goal of the game and the Eagles’ sixth when he blasted home Sanusi’s low cross in the 60th minute.

After Moffi’s initial effort was stopped by the keeper, the Eagles proceeded to run rampant and earned their seventh goal through Lookman, who smashed into the net.

On 65 minutes, Osimhen got his hat-trick and the Eagles’ eighth goal, running to a through cross from Musa in the middle and slotting his shot under the goalie.

The Eagles made a triple substitution in the 71st minute, with Leon Balogun, Umar Sadiq, and Emmanuel Dennis replacing Bassey, Moffi, and Lookman.

With six minutes remaining, Osimhen scored his fourth goal, putting the Eagles ahead 9-0 thanks to another Musa assist.

Osimhen came close to getting his fifth goal a few minutes later, but his effort hit the woodwork.

In the second minute of overtime, the Eagles were granted a penalty, which Dennis converted after being fouled.