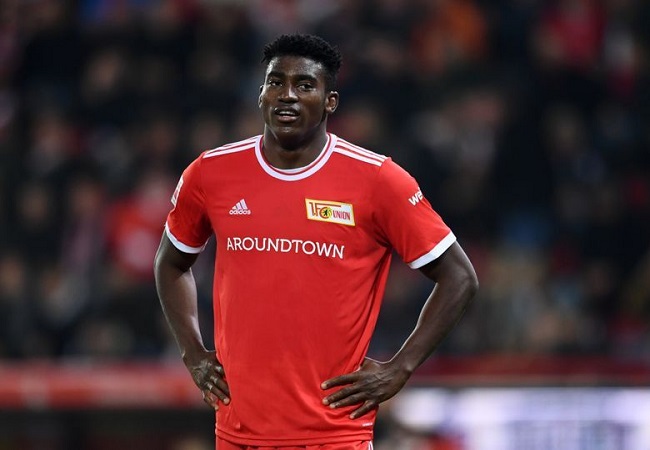 The newly-promoted Premier League club Nottingham Forest completed the signing of the Nigeria international Taiwo Awoniyi for a club-record €20.5 million from German Bundesliga side Union Berlin on Friday.

The Nigerian striker has then sent an appreciation message to Union Berlin and their fans following his departure.

The 24-year-old is pleased with the move. But he acknowledges that he had a great time in Berlin. And he shared his appreciation to his former employers.

“It’s been an amazing two years with you guys.” Awoniyi said as per Union Berlin Twitter.

“I’m short of words. But I just want to say thank you very much for everything.

“Maybe we will see again, maybe not. But I just want to say a very big thank you.

“And to the coaches, the fans, the whole club, it is hard to say goodbye. But I know that this will always be my home.” Awoniyi said.

Awoniyi struggled with his first few years in Europe. The Super Eagles striker signed for Liverpool. But he was unable to play for the Merseysiders because of work permit problems.

The 24-year-old went on five different loan deals before finally joining Bundesliga side Mainz in 2019. However, his stay at Mainz was not productive, as he was restricted to twelve appearances, scoring just a goal and an assist.

Nonetheless, Union Berlin swooped Awoniyi at the expiration of his loan at Mainz. It was with the Die Eisernen that the Imperial academy product began to make waves.

In Awoniyi’s first season, he notched five goals and four assists in 22 appearances for the club, promoting Union to splash €6.5 million to sign him from Liverpool.

After a year of success, with twenty goals, and seven assists for Union Berlin, Awoniyi is returning to the Premier League, albeit in Nottingham Forest colors.