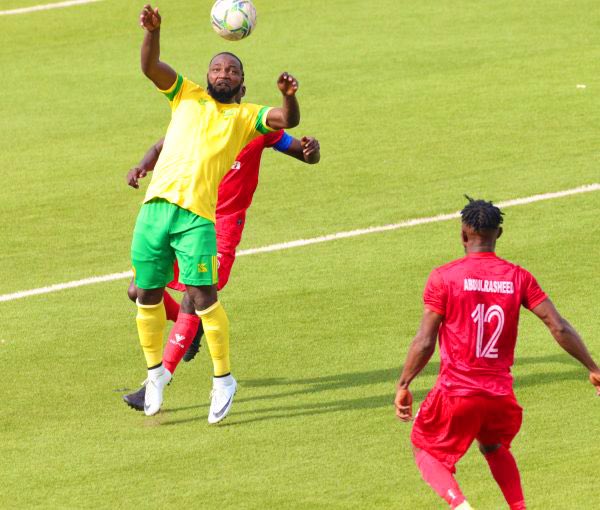 The Remo Stars kept the third and last continental slot available in the Nigeria Professional Football League NPFL, for the despite a 3-2 loss to Katsina United.

Isah Ali returned from injury, and Haruna Hadi was given a starting spot in addition to Emmanuel Daniel in goal and Sikiru Alimi heading the attacking line.

As both sides assessed one another throughout the opening ten minutes of the game, few opportunities were created for either squad.

In the 12th minute, Katsina Utd would score their first goal after brilliantly splitting the Remo Stars defense with pass exchanges, which Tosin Omoyele converted from close range.

Ifegwu Ojukwu received a wonderful cross from Ewelike Edozie, but his defender headed the ball away as Remo Stars attempted to immediately counter.

Abdulrasheed Awoyemi was found to have fouled Ahmed Abdultaofeek five minutes before the half-hour mark, and the referee pointed to the spot.

Tosin Omoyele would eventually score for the host to earn his brace.

In the 33rd minute, Remo Stars received a free kick on the edge of the box. Ifegwu Ojukwu and Haruna Hadi both stood to take it, but the former only connected with the wall.

Remo Stars had a second chance at a set piece, this time from a corner kick, but it was in vain as the host team won the first half 2-0.

In the 56th minute of the second half, Sikiru Alimi scored a goal for the opposition by deftly gliding past two defenders and firing a left-footed effort into the back of the net.

In a flash, “The Oracle” made two attacking substitutes, replacing Qudus Akanni and Haruna Hadi with Andy Okpe and Samuel Anakwe.

Dauda Madaki had a free kick near the box for Katsina United with 15 minutes remaining in regulation, but he could only blast it over the bar.

Adegbite Alhameen replaced Ifegwu Ojukwu with 10 minutes remaining in the game. The next to put the hosts to the test was Samuel Anakwe, who wiped in a cross after eluding his man but giving Katsina Utd clean to safety.

Adebayo Abayomi’s marker stamped his foot on the midfielder’s face, drawing the attention of the medical staff.

Adegbite Alhameen scored on an Andy Okpe flick-on with two minutes remaining in regulation to tie the score at 2-2.

However, play was halted for a very long time as the assistant referees from Bauchi and Benue State, Ahmad Abdullahi and Ber Simon, and the referee from Delta State, Lawyer Chinedu, discussed whether or not the goal should stand.

Emmanuel Matthew scored off a pass from Dauda Madaki to give Katsina Utd the lead after the game resumed with the Sky Blue Stars playing much over and past the two minutes of allotted extra time.

Despite the determined recovery the team led by coach Gbenga Ogunbote made in the encounter in the country’s far north, the outcome nevertheless preserved Remo Stars’ position on the table.

With 53 points after the loss, Remo Stars are still third on the log, only one point clear of Rangers and Enyimba, who are in fourth and fifth, respectively.

On Sunday, the Sky Blue Stars will travel back to Ikenne to get ready for a crucial match against Enyimba.