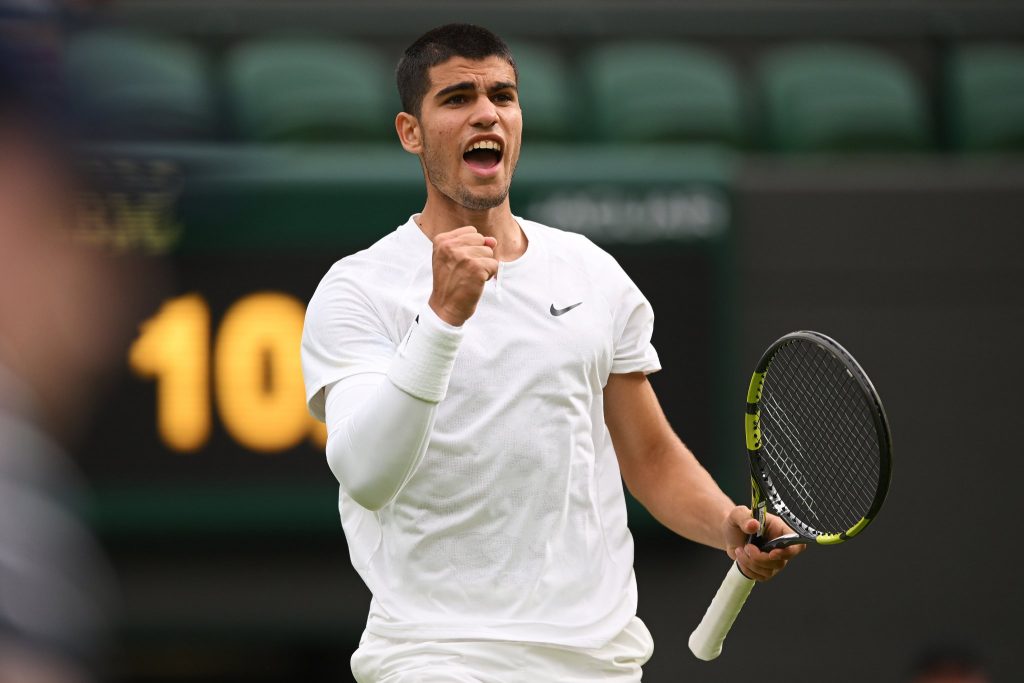 On Monday night, Carlos Alcaraz’s chances of winning Wimbledon were in jeopardy.

The 19-year-old did, however, pull through to make it to Wimbledon’s second round for the second time.

Alcaraz, who was competing at Wimbledon for the second time, increased his intensity and dug in, scampered around the baseline to hang on to points, and produced flashes of brilliance in crucial times to improve his five-set record to 5-1.

Before raising the roof with his shot-making at the conclusion of the fifth set to improve to 1-1 in his ATP Head2Head series with Stuff, the Spaniard struck an amazing backhand passing shot at 0/2 in the fourth set tie-break to keep himself in the match.

For the first time at SW19, Alcaraz will play either Fabio Fognini or Dutchman Tallon Griekspoor as his next opponent.

The World No. 7 fell to Daniil Medvedev in the second round of last year’s tournament.

Alcaraz, who beat Struff to win his 33rd match of the season, is a different proposition now after winning a Tour-high four titles in 2022.

In his fourth grass-court match of the year, Struff got out to a fast start, broke Alcaraz in the third game to seize the initiative.

The German attempted to gain possession of the ball as soon as possible while dictating behind his forehand and scoring 17 winners to clinch the set.

But in the second set, Alcaraz showed his will to win by stepping up his effort and variety to move Struff about and level.

In the third set, the German swiftly found his footing and won 100% (13/13) of the points off his first serve to take the lead once more.

Struff appeared to be heading for victory as he rapidly seized a 2/0 lead in the fourth set, which was proceeding to a tie-break.

Alcaraz, however, wouldn’t go down easily, striking a fantastic pass to get a foothold before deepening his return to force a fifth set.

Alcaraz continued to attack in the decider, fueled by momentum, and was rewarded with the crucial break in the ninth game before holding serve to win.

After defeating then-World No. 7 Andrey Rublev at Roland Garros in 2022, Struff was seeking for his second Top 10 victory at a Grand Slam.

Due to a right foot ailment, the World No. 155, who has previously been to the third round at Wimbledon, missed the European clay swing.

Nevertheless, although losing, the German demonstrated with his outstanding performance against Alcaraz that he is regaining his best form.