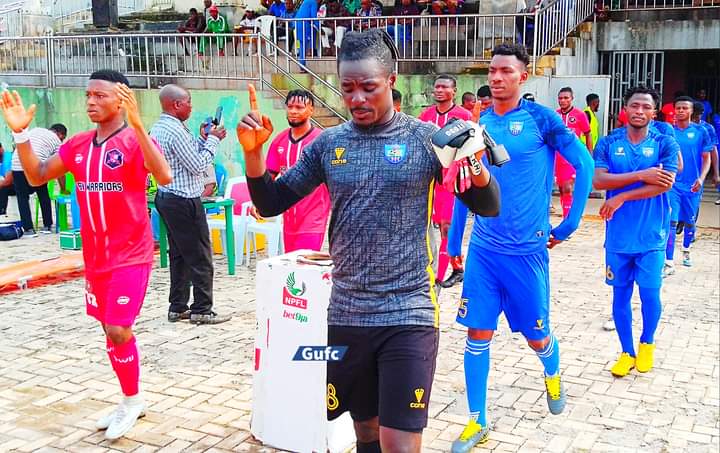 Gombe United head Coach Aliyu Zubairu said his side were unlucky or to have shared points against Abia Warriors on Matchday 36 of the NPFL.

Kelechi Chimezie’s long range goals was not sufficient to give his team a point at the Okigwe township stadium.

Valentine Odoh’s header gave the hosts the lead after just three minutes, but Gombe United immediately answered when Yusuf Abdulazeez converted a penalty kick in the sixth minute after Barnabas Daniel was brought down inside the area to score his 16th goal of the season.

The score was 2-1 in favor of the Abia Warriors at the end of the first ten minutes of play thanks to Paul Samson’s goal after a defensive blunder.

Valentine Odoh’s goal-bound header deflected off Sani Shehu’s knee in the 63rd minute as Gombe United battled for an equalizer.

As the game was about to end, Kelechi Chimezie blasted a vicious shot right outside the center circle that evaded Edafe Vincent’s reach.

Speaking in his post-match, Zubairu said the league has entered a crucial stage as clubs tried to avoid any mistake that would affect them negatively.

” As you can see we’re in a dicey situation with just two matches remaining, every is fighting in order to end the season on a positive note”.

He explained that Gombe United are leaving no stone unturned towards finishing the season in a safe and stable position on the log.

” We’re going back home God willing and get prepared for our next match at home, and picking the maximum three points is non negotiable” he said