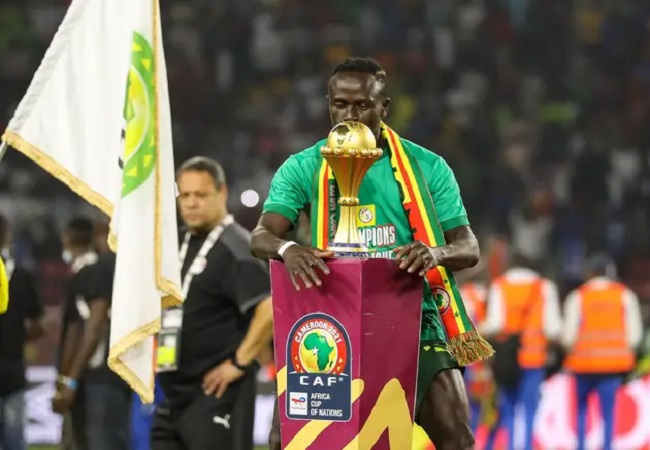 During the 2021 African Cup of Nations, AFCON, Sadio Mane suffered a head injury after colliding with Cape Verde keeper Vozinha in the last 16 match. This incident resulted in the substitution of the Liverpool star striker.

As Senegal were through to the quarter finals, Mane was a doubt after suffering concussion in the previous game. Ans seeing Mane on the field worried Liverpool, his club at that time, who had written to Senegal’s football federation to ensure that Mane be rested for five days. This meant that he would have missed the quarter final clash. Determined to help his country, Mane however took the risk as he refused to rest and miss a single game.

“When I got injured against Cape Verde and I had concussion, I never talked about it that day.” Mane told Pro Direct Soccer France.

“Liverpool put pressure on the federation and wrote a letter to Fifa that I needed at least five days rest so that meant I was to miss the quarter-finals.”

“Our national team doctor also had to follow those rules. When they told me that, I called the coach and told him ‘The doctor does not want me to play. But you have to put me in the starting 11’.” He continued.

“I called the federation president and told him we need to have a meeting. Because I have to play. I could give up my life.” Mane added.

Mane was ready to sign a contract saying that it would be no one but his won fault if he had died on the pitch. Eventually, he was declared fit by the team doctors.

Mane added: “I know I shouldn’t play but let us have a contract. It will be my responsibility, I will sign.”

“It was around 1am or 2am, everyone panicked and I said ‘Coach, I know even you are scared. Just write a letter that says I played voluntarily in case I die or whatever happens’. Everyone was tensed.”

“I did not sign the paper but they finally said ‘no, no it’s not possible.’ But I was ready to do it so the doctor said ‘Okay, let us do a scan in the morning the day of the match.’”

“In the morning, we did the scan. We sent it to the Confederation of African Football. They checked with the doctor. There was nothing so the doctor said “Okay, you can play.” Because to see me sign a paper would be complicated for him as well. Thank God everything went well.”

Mane went on to be the hero as he scored the winning penalty in the final shoot out against Egypt.

Also Read : MANE ANNOUNCES SURPRISE EVENT IN SENEGAL WHEN HE WILL START PLAYING WITH BAYERN

Now Mane left Liverpool for Bayern Munich and has to be focused on the season ahead. And hopefully, he can hit the ground running straight away.