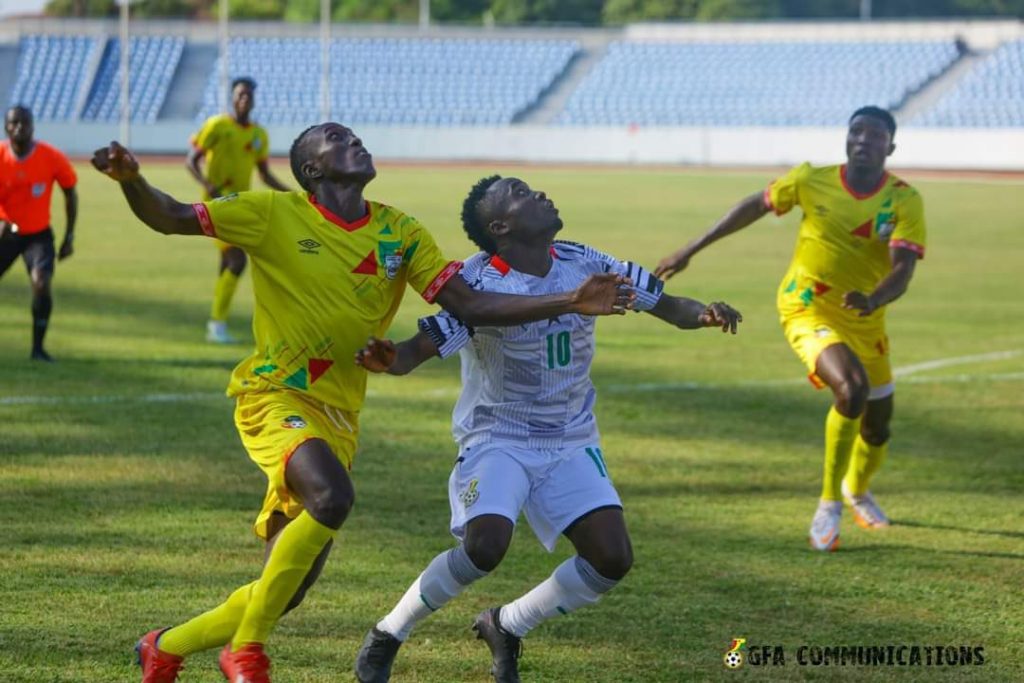 In the first leg of the CHAN qualifiers on Sunday afternoon at Cape Coast Stadium, the Ghanaian Black Galaxies trounced Benin 3-0.

As Imoro Ibrahim came under pressure, Benin started the game on the front foot and posed challenges for Ghana on the left flank. However, this quickly changed as Ghana improved their performance.

The first game was ultimately started following a pass exchange between Kassim Razak and Evans Osei-wusu, whose cross struck the hands of the Benin defender and the referee pointed to the spot.

Afriyie Barnieh took the opportunity and buried the goal, giving the score 1-0.

Ghana should have added a second goal, but oddly enough, a flawless team goal was disallowed by the referees despite the fact that replays revealed it should have stood.

After a move featuring Evans Osei Wusu, Awako, and Afriyie Barnieh resulted in a cross that was finished by the Legon Cities forward but was disallowed by the referees, Jonas Attuquaye supplied the finishing touch.

Nurudeen Mohammed’s goal from a corner kick made it 2-0 as Ghana came out strong in the second half.

To make it 3-0, Awako curled home into the top left corner of the goal past the desperation dive of the Benin goalkeeper after Umar Basjiru delivered a well-weighted disguised pass.

A few seconds after Awako’s goal, Afriyie Barnieh should have made it 4-0 but misjudged his position when one on one with the goalkeeper.

Prior to the final match against Nigeria for the team that would qualify for the Algria 2023, the Black Galaxies will go to Benin for the second leg next week.