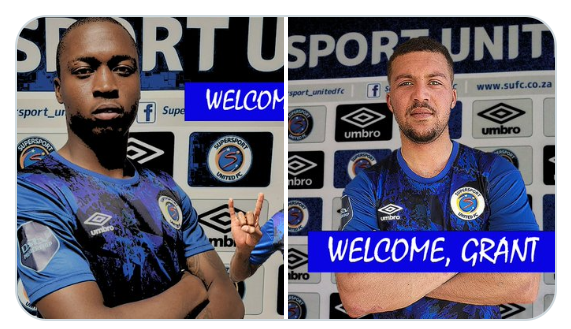 SuperSport United, a DStv Premiership team, has announced the addition of two additional players from their Tshwane rivals Mamelodi Sundowns.

Grant Margeman and Thabang Sibanyoni have joined Matsatsantsa on loan from the DStv Premiership champions, the club announced after confirming that goalkeeper Ricardo Goss had joined on a two-year loan from Sundowns.

Sibanyoni has a contract that will keep him employed through the end of the upcoming season, while Margeman has a two-year loan agreement.

“Grant is an exciting young talent that we look forward to working with this season and hopefully in the future.

“Thabang is a classic number nine that Gavin likes and feels will fit into our style very nicely.

“We welcome them both to the club,” via the club’s communications division, SuperSport CEO Stan Matthews made the statement.

The 26-year-old striker Sibanyoni was ecstatic about his new team.

He said he wanted to prove that he can score goals.

“I am happy to join this great club. I have always wanted to prove that I can score goals in the Premier Soccer League, that’s why I am so excited to join SuperSport United.

“My ambitions are to score more goals and hopefully to be in the top 10 goal-scoring-list this season.”

While Kaitano Tembo was still the Matsatsantsa coach, Margeman spent the previous season with Swallows and SuperSport expressed an interest in signing him.

Sibanyoni, on the other hand, spent half a season with both Sekhukhune United and University of Pretoria last year.

Sibayoni was acquired as part of the Ronwen Williams transaction, which also involved Goss moving to Matsatsantsa.