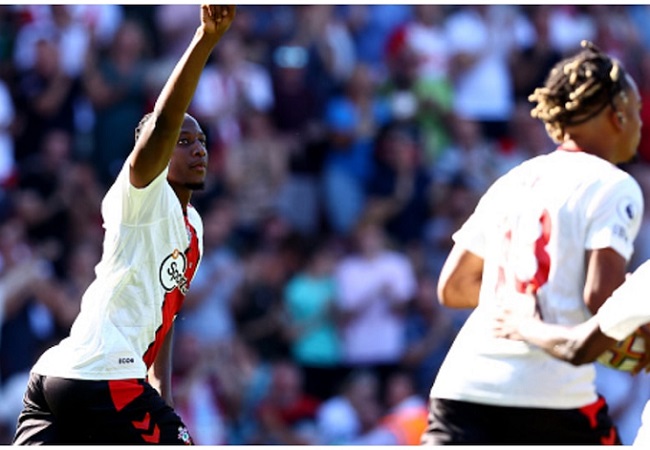 The English Premier League returned for week two this weekend, and it has been a game week that has brought different tidings for Nigerian players involved.

Joe Aribo scored on his Premier League home debut for Southampton as they came back from two goals down to force a 2-2 draw against Leeds United at the St Mary’s Stadium on Saturday evening.

The Nigeria international midfielder made his full Premier League debut last weekend at Tottenham Hotspur. But he started the clash against Leeds United on the bench in a surprise decision by manager Ralph Hasenhüttl.

After a goalless first half, the game burst into life in the opening minute of the second half as Rodrigo opened the scoring and the Leeds number 19 scored another great header to double the advantage on the hour mark.

Hasenhüttl’s immediate response was to bring on his summer signing from Glasgow Rangers as a replacement for Stuart Armstrong in the 61st minute.

It was game on in the 72nd minute as Aribo found the bottom corner from close range after he was found by Adam Armstrong.

With ten minutes left, Southampton were back on level terms through Walker-Peters, who blasted into the far corner.

Despite six minutes of additional time, there were no further goals in the game as both teams settled for a share of the spoils.

Elsewhere in North London, Kelechi Iheanacho came off the bench to assist a goal for Leicester City in their 4-2 loss at Arsenal.

A brace from Gabriel Jesus gave the Gunners a two-goal lead within 35 minutes. Then Granit Xhaka and Martinelli added one each for Arsenal.

Iheanacho assisted James Maddison’s goal writhing four minutes after he came off the bench, and Saliba scored an own goal. However, the goals were insufficient for the foxes.