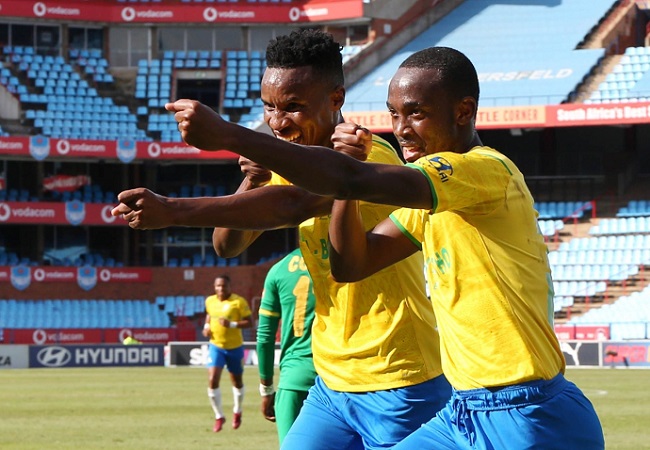 A brace by Peter Shalulile and a goal each from Gaston Sirino and new signing Abubeker Nasir gave Sundowns a comfortable victory over their sworn rivals in a DStv Premiership clash.

It took Sirino just six minutes to find the back of the net after an unforced error from a woeful Siyabonga Ngezana, who attempted a back pass when he could have cleared the ball by sending it any other way but towards his goal.

Ngezana was once again at fault 11 minutes later when he brought down the deadly Shalulile inside the box. And the latter didn’t make a mistake from the penalty spot to score his first goal of the season.

Except for the Yusuf Maart shot that went over the crossbar, there was nothing much from Chiefs in the first half.

Chiefs coach Arthur Zwane, who still has a lot of work to do to get Amakhosi to where they are supposed to be, took off Ngezana and Cole Alexander for Njabulo Ngcobo and Kgaogelo Sekgota before the start of the second stanza.

Those changes seemed to have done the trick as Chiefs began to play with a bit of intent going forward.

Reeve Frosler had a chance to minimise Sundowns’ lead. But he fumbled his good opportunity inside the box as he sent it wide.

While Chiefs were wasting their chances, Shalulile completed his brace on 53 minutes and virtually put the match beyond Amakhosi.

Khama Billiat had the best chance to score from the penalty spot after Sekgota was brought down in the box by Teboho Mokoena. However, Billiat’s attempt was brilliantly saved by goalkeeper Ronwen Williams.

Exciting Ethiopian signing Nasir put the final nail on Chiefs’ coffin with 14 minutes to play, after he had come on as a replacement for Sirino.