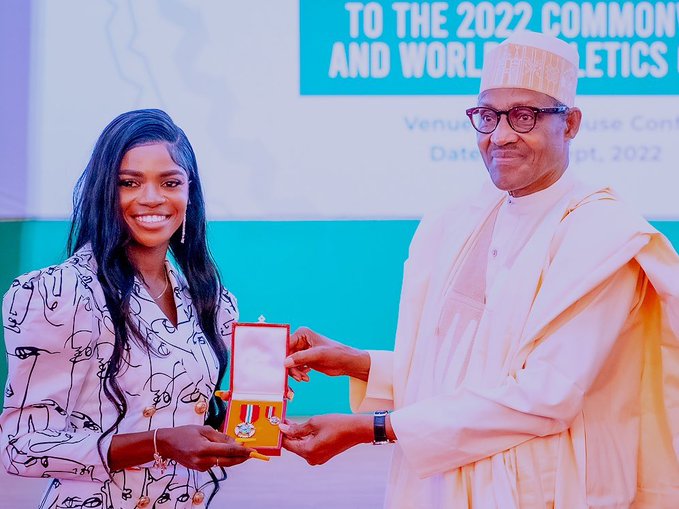 The President said his Government is committed to rewarding excellence, especially for members of Team Nigeria who sparked the national spirit of winning via outstanding performances at international events, in remarks made during a reception held in the athletes’ honor.

He offered his congratulations to all the winners and beneficiaries and stated his belief that this will inspire them to do even more.

The President praised the athletes for proudly representing Nigeria in nine athletic events, describing them as champions, deserving ambassadors, national heroes, and heroines.

”I watched with millions of Nigerians those exciting moments when you all brought smiles to us and our homes by breaking world, national and games records, as well as achieving personal best in your careers.

”Your outstanding performances in recent times are consistent with the determination of a nation always yearning for excellent performance.

”You all, members of Team Nigeria have ignited the spirit for victory in our nation but even more you have been victorious in major sporting championships and games.

”I have followed keenly your achievements at the World Championships in Oregon USA and indeed your remarkable performance at the recently concluded Commonwealth Games in Birmingham, United Kingdom.

”And I am very pleased that you displayed at both the personal and group levels great sporting talents and delivered for your country great podium performances,” he said.

The President remarked to the athletes that Nigeria was on the “radar of the globe” during their moment of sporting success and that their accomplishments had significantly boosted the country’s goodwill.