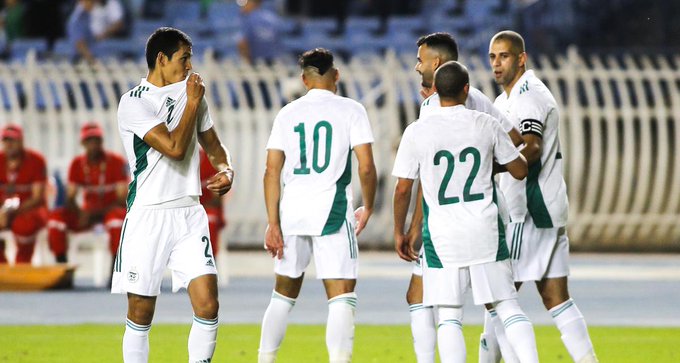 In a Tuesday international friendly in Oran, Algeria’s Desert Foxes maintained their winning streak against the Super Eagles, triumphing 2-1.

Early in the first half, Terem Moffi gave the Super Eagles the lead, but goals from Riyad Mahrez and Youcef Atal clinched the victory.

As a result, Algeria has now defeated the Super Eagles in four straight meetings.

On the fifth minute, the Algerians were given a good-area free kick, but their attempt hit the Super Eagles wall.

However, the Eagles were the ones to break the tie in the ninth minute when Moffi scored into an empty net following a blocked shot by Kelechi Iheanacho.

Mahrez had an opportunity on the edge of the box in the 16th minute, but his attempt was blocked for a corner.

Following a weak back pass header by Zaidu Sanusi, Mahrez came close to tying the score for Algeria on the 20th minute, but his attempt hit the post.

On minute 27, a dangerous cross was nearly rewarded for the Algerians’ persistent probing, but Calvin Bassey made a quick stop.

Ademola Lookman believed he had doubled the Super Eagles’ advantage in the 29th minute, but he was called for offside.

In the 31st minute, Iheanacho sent a long-range attempt at the Algerian goalkeeper, who stopped it.

The Algerians were awarded a free kick with ten minutes remaining in a good position, but Francis Uzoho calmly saved the shot off the foot of Youcef Belaili.

On the 41st minute, Ramy Bensebaini was fouled by Frank Onyeka and then converted the resulting penalty kick to tie the score for Algeria.

With a minute remaining Iheanacho sent in a dangerous set piece but Ola Aina failed to get to it on as it went out for a goal kick.

Five minutes into the second half Belaili cut in from the left beat Kevin Akpoguma but fired wide off the mark.

On minute 56, Islam Slimani nearly gave Algeria the lead by connecting with a cross with his head, but the ball sailed wide of the goal.

Iheanacho was put up by Moffi just before the hour mark but struck directly at the goalkeeper from inside the box.

Algeria increased its lead to 2-1 in the 61st minute after Atal fired in a long-range shot that outlasted Uzoho.

Moffi nearly brought the Super Eagles back level, but his strike took a deflection and went straight to the keeper.

Lookman was replaced with Saviour Godwin with 20 seconds remaining.

Algeria was given a free kick with 12 minutes remaining, but the cross was headed over the crossbar.

Onyeka and Iheanacho were substituted in the 85th minute by Cyriel Dessers and Raphael Onyedika.

The Super Eagles broke through on the left in the 88th minute through Sanusi, but his low cross was blocked for a corner.

In addition, Algeria was awarded a free kick in stoppage time for a foul by Bassey, but the shot barely cleared the crossbar.