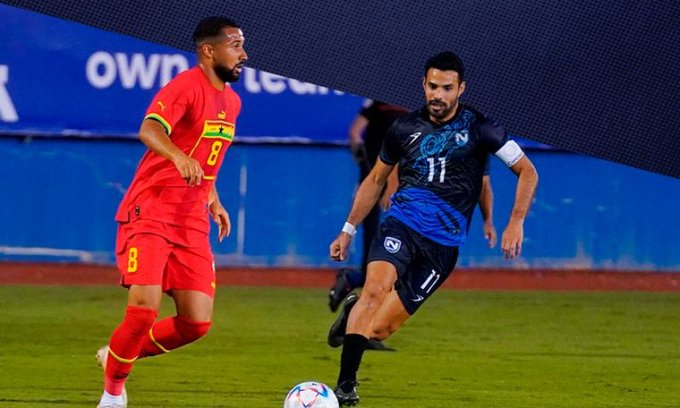 Attacker Fatawu Issahaku of Sporting CP scored his first goal for Ghana on Tuesday night during a friendly match against Nicaragua.

At the Estadio Francisco Artés Carrasco in Lorca, Spain, the Black Stars’ first goal against the Central American team was scored by Issahaku.

Ghana took the lead when the winger received the ball on the right, created space for himself, and sent a curling shot into the goal.

Issahaku was playing for the Black Stars for the 13th time. He is regarded as a squad player and made his debut against Zimbabwe last year.

Read Also:Andre Ayew : Everything in place for Ghana to have a successful 2022 World Cup

The 18-year-old relocated to Portugal earlier this year and signed a 1.2 million-euro contract with Sporting CP.

He has now appeared for the first team three times this year.

Otto Addo, the Black Stars’ head coach, was pleased with his team’s performance against Nicaragua in the international exhibition match.

In Lorca, Spain, Addo has acknowledged that a convincing victory would have been preferable to a 1-0 one.

Inaki Williams, Osman Bukari, and Fatawu Issahaku were added to the lineup of the team that had been humiliated by Brazil by Addo. The Sporting Lisbon winger scored Ghana’s goal in the 35th minute.

Ghana had the majority of the ball in the second half and produced lots of chances, but they were all missed.

“I’m satisfied with today’s performance but you can criticise not scoring more goals. I will score it 7/10 but surely we should score more,” Addo said after the game.

Black Stars will play another friendly against Switzerland on November 17 before beginning their World Cup campaign on November 24 against Portugal.