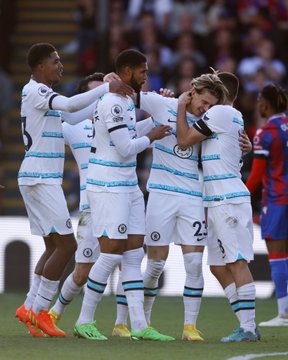 Pierre Emerick-Aubameyang opened his goal account as Chelsea got their first win under new manager Graham Potter against Crystal Palace.

Aubameyang who returned to the Premier League after a spell with Barcelona made his second appearance for the Blues.

Chelsea trailed in the 7th minute when Odsonne Edouard scored for the Eagles.

The Ghanaian’s dipping cross found Edouard, who stretched to poke the ball past Kepa Arrizabalaga.

Chelsea equalizer was surrounded by controversy after Thiago Silva escaped being sent off for handling the after he fell to the ground, denying Ayew a possible goalscoring opportunity.

The Brazilian was given a yellow card by referee Chris Kavanagh, which was upheld after a VAR review, much to the chagrin of Palace manager Patrick Vieira (who was booked for his protests) and his players.

Thiago went ahead to provide the assist for Aubameyang to level for the visitors at Selhurst Park.

In the 76th minute, Potter substituted Kai Havertz for Gallagher, who had made his England debut the previous season thanks to his stellar play for Palace.

The 22-year-old midfielder nutmegged Jean-Philippe Mateta as the game appeared to be heading for a draw when he curled a shot into Vicente Guaita’s top corner.