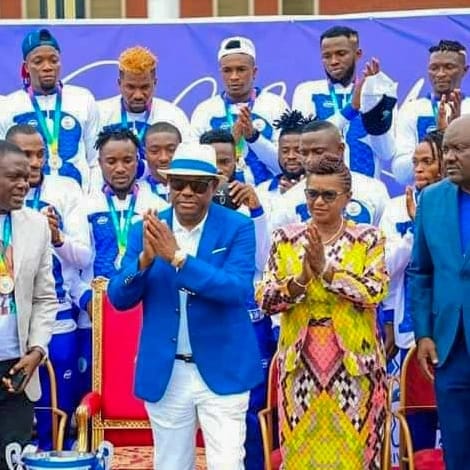 Rivers United’s players have been urged by the governor, Nyesom Ezenwo Wike, and POS Africa to aim for triumph and honor in their two CAF Champions League games this month against Wydad Athletic Club of Casablanca, the defending champions of Africa.

This weekend, Rivers United will play the Moroccans in the first leg of their second-round match at the Adokiye Amiesimaka Stadium.

The winner of the match with a win over two legs advances to the lucrative group round of the competition.

The squad is supported by the people of Rivers State and Nigeria, according to Wike, who was represented by Barr. Chris Green, the Rivers State Sports Commissioner, as they strive to offer their nation creditable representation in Africa’s top club championship.

“The Governor, who is the number one fan of this club, has asked me to inform you all that the people of Rivers State are solidly behind you in this national project,” Barr. Green said as he addressed players, coaches and officials of the club ahead of Sunday’s huge clash.

“I also want to let you know that the Governor has graciously approved the sum of $20,000.00 for each player for winning last season’s Nigeria Professional League title.

“The Governor has also announced that if you qualify for the group stages of the Champions League, you will receive $40,000.00 each.

“So go out there and compete with dignity, honour and the traditional Rivers spirit to put smiles on the faces of Rivers people and indeed all Nigerians,” he concluded.

Club captain Festus Austine responded by thanking the Governor and Commissioner and pledging that the players will work hard to live up to the trust placed in them by Governor Wike and the residents of Rivers State.