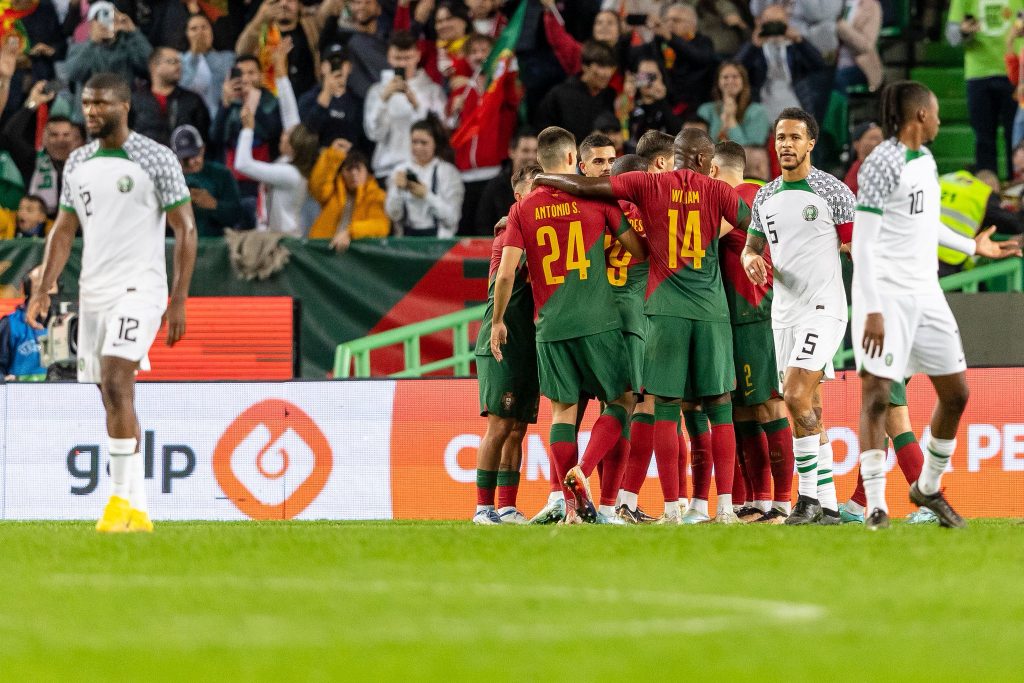 Portugal’s final exhibition match before departing for Qatar for the 2022 World Cup saw them easily defeat the Super Eagles 4-0 at the Estadio Jose Alvalade in Lisbon on Thursday night.

The decisive victory was secured by a brace from Bruno Fernandes in the first half and goals from Joao Mario and Goncalo Ramos in the second.

Bright Osayi-Samuel, a defender for Fenerbahce, started the game for the Super Eagles, marking his international debut.

Cristiano Ronaldo, the team’s captain and star forward, was absent due to a stomach virus.

On November 24, the Ghanaian Black Stars will face the 2016 European Champions to kick off their 2022 World Cup campaign.

Early pressure from Portugal finally paid off in the ninth minute when Fernandes scored following a cutback from Diogo Dalot.

Nuno Mendes nearly extended Portugal’s advantage in the fifteenth minute, but his left foot curler missed the top corner.
On minute 19, Portugal came even closer, but Dalot’s dangerous cross eluded everyone in the penalty area.

Two minutes later, Joao Felix made a long-range attempt that narrowly missed the goal.
On the 25th minute, Joe Aribo was in the box after receiving a pass from Alex Iwobi, but his shot was blocked for a corner.

Moses Simon fired a low shot in the 30th minute, but Rui Patricio dived to his right to make the save.

After Osayi-Samuel blocked Bernardo Silva’s cross after 35 minutes, Fernandes increased the score to 2-0 from the penalty spot.

The Manchester United player nearly scored his hat-trick after slipping past the Super Eagles’ defense and avoiding Francis Uzoho, but his shot missed the target.

Ademola Lookman and Wilfred Ndidi were replaced by Samuel Chukwueze and Frank Onyeka before the second half began for the Eagles.

As Chukwueze sped toward the Portuguese neighborhood, his introduction almost paid off, but it was unsuccessful.

Calvin Bassey’s low, dangerous cross was deflected by a Portugal defender in the 61st minute.

In addition, Oghenekaro Etebo replaced Aribo in the 69th minute.

The Super Eagles’ best opportunity came from Chukwueze on minute 71. He ran on to an Iwobi pass and beat his defender cleanly, but Patricio stopped his goal-bound effort with an outstretched leg to force a corner.

A few minutes later, Uzoho was required to take action as he parried a well-placed shot away for a corner.

Felix received a ball inside the box with 15 minutes remaining and fired a low shot that barely missed the target.

On minute 81, the Eagles had a chance to lower the score, but Emmanuel Dennis’ penalty was saved.

Portugal Ramos increased the score to 3-0 in the 82nd minute by merely tapping into an open goal.

Mario then increased the score to 4-0 by putting the ball into an empty net after a superb flip pass on minute 84.