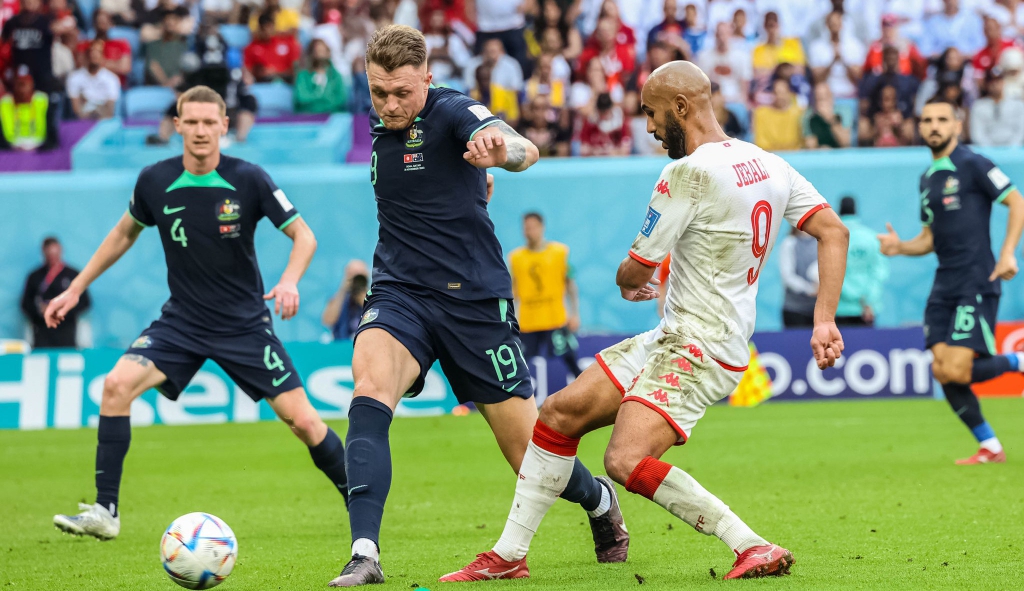 Australia defeated Tunisia 1-0 on Saturday to restore their chances of making it to the round of 16 in the 2022 FIFA World Cup for the third time in their history.

Mitch Duke, a striker, scored the game’s lone goal with a deft header in the first half, and Australia then clung on desperately to silence Tunisia’s boisterous supporters.

After being soundly defeated 4-1 by tournament hosts France in their opening match, Australia is currently in second place in group D with three points after two games.

The Socceroos’ final group game is against Denmark, who will play France later on Saturday. After that, the knockout round will begin.

When Tim Cahill, Harry Kewell, and Mark Viduka were on the team, they had their finest World Cup performance in 2006 when they also advanced to the round of 16.

At Al Janoub Stadium, where their supporters were greatly outnumbered, Graham Arnold’s Australia kicked off amid deafening whistles in front of 42 000 spectators despite lacking players of that caliber.

Whistles from the thronging columns of bouncing, screaming, and flag-waving Tunisia supporters greeted each touch from Australia.

Prior to this, Australia had only previously won two games at a World Cup, and they qualified for this edition via a playoff.

However, they got off to a better start than Tunisia, who were trying to go to the knockout round for the first time and held Denmark to a scoreless draw in their opening match.

Australia’s tough team dominated the opening 15 minutes of the match without registering a shot, and fans saw this on primetime Saturday night television.

The first goal-scoring opportunity for Tunisia came in the 19th minute, but captain Youssef Msakni was forced out and defender Mohamed Drager blasted over.

Australia gained the lead their possession deserved in the 23rd minute.

Craig Goodwin, who scored the first goal in the defeat to France, crossed the ball from the left, and Duke’s header bounced back over his own shoulder and into the goal.

The 31-year-old center forward, who plays in Japan, got into an argument with the Tunisian bench after being shoved over at the halfway point.

With Manchester United substitute Hannibal Mejbri, the altercation came to an end with a handshake.

As halftime drew near, Stoke City defender Harry Souttar, another player with English citizenship, made a brave last-ditch block from the perilous Msakni.

When Msakni finally managed to elude Souttar in stoppage time, he sidefooted wide from close range, leaving Tunisia’s supporters with their heads in their hands.

At the half, Drager was replaced by Ferjani Sassi, a midfielder, by coach Jalel Kadri, and the game, which had been simmering up until that time, threatened to blow up.

Australia was on the attack and just missed adding a second goal when Mathew Leckie failed to connect on a low cross as he dived in front of the net.