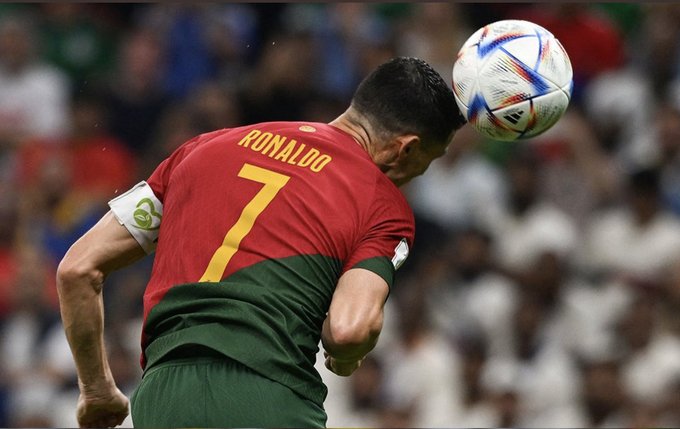 Cristiano Ronaldo was not the scorer of Portugal’s opening goal in their victory over Uruguay on Monday, according to FIFA, which confirmed this after adidas’ match ball technology indicated there was no contact on Bruno Fernandes’ cross.

When Ronaldo attempted to meet Fernandes’ inswinging delivery with a glancing header, it was initially believed that he had scored his tenth World Cup goal, putting Portugal on course for a 2-0 victory.

Although FIFA later intervened to give Fernandes credit for his first World Cup goal, the five-time Ballon d’Or winner celebrated the strike wildly at the time.

Later, Fernandes secured the victory from the penalty spot as Portugal assured their place in the round of 16, and thanks to technology used by match ball manufacturers adidas, his two goals will stand.

A FIFA statement reads “In the match between Portugal and Uruguay, using the Connected Ball Technology housed in adidas’s Al Rihla official match ball, we are able to definitively show no contact on the ball from Cristiano Ronaldo for the opening goal in the game.

“No external force on the ball could be measured as shown by the lack of ‘heartbeat’ in our measurements.

“The 500Hz IMU sensor inside the ball allows us to be highly accurate in our analysis.”

After the victory, Fernandes stated it wasn’t relevant who scored Portugal’s opening goal, but he did describe his initial impression that Ronaldo had touched the ball.

With Ronaldo scoring three goals for his nation, Fernandes has more than double the amount of goals as any other Portugal teammate in 2022 thanks to FIFA’s decision.

The former Manchester United teammate of Fernandes is still one goal short of tying Eusebio’s record of nine goals for Portugal in World Cup finals, all of which came in 1966.