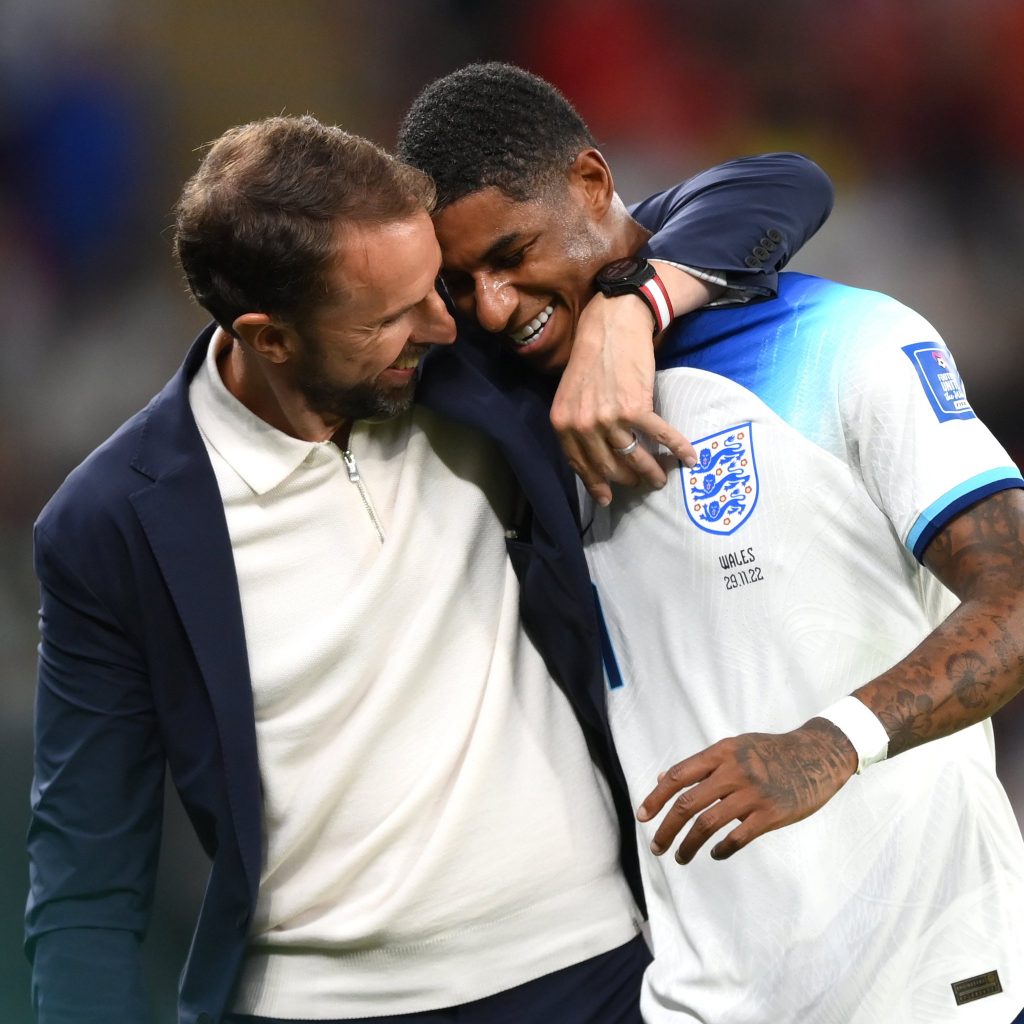 Marcus Rashford’s World Cup performances were “totally different players,” according to Gareth Southgate, from his England efforts during the postponed Euro 2020.

Prior to a flurry of online racial abuse directed against Rashford, Bukayo Saka, and Jadon Sancho, the Manchester United forward missed a penalty kick in the shootout of the European Championship final loss to Italy.

After the heartbreaking Euro 2020 loss, Rashford seemed to be out of form, but strong club performances for United prior to the November break helped him earn a spot in Southgate’s 26-man squad for Qatar.

To help England advance as Group B champions, the 25-year-old scored as a substitute in the 6-2 triumph over Iran and celebrated a brace after starting in the 3-0 success over Wales on Tuesday.

Southgate praised Rashford’s turnaround as he became the first United player since Bobby Charlton at the 1966 World Cup to score three goals for England.

“It has been a challenge for him. I went and saw him before the season and had a long chat with him, he had some clear ideas on what he needed to do,” the England manager said of Rashford.

“With his club, he’s been happy with his performances this year and it showed on the training ground with us.

“We’ve got a completely different player here than we did at the Euros, he could have had a hat-trick in the first half as he was getting in all the right areas.

“He deserved his goals.”

No player at the Ahmad bin Ali Stadium had more touches (eight) in the opponent’s penalty area, shots (six) – just one fewer than the Wales team managed – or attempts on goal (four) than Rashford.

With Phil Foden also scoring and Raheem Sterling and Bukayo Saka being benched for the match against Senegal on Sunday, his outstanding performance presents Southgate with a selection conundrum.

Southgate’s decision not to use Foden at all during the drag goalless draw against the United States drew criticism, but the manager welcomed the headache he now has.

“You need goals from all areas, it is a problem for opposition teams if the threat is coming from other areas of the pitch,” Southgate added.

“We have talked about that a lot, across the three games pretty much all our forward line have got off the mark with goals or quality assists.

“That is a good place for the forwards to be, they need that confidence, competing for places is where we want to be because then everyone knows they have to deliver.

“You want those sorts of decisions, we need strength in depth. Kyle Walker and Kalvin Phillips both got minutes, you never know when we are going to need certain players.”

England made it all the way to the semifinals at the 2018 World Cup in Russia before winning the Euro 2020 tournament three years later, but Qatar marked the first time the Three Lions won their group at a FIFA World Cup since 2006.

Southgate is still full of optimism because he thinks England is a much better team than the one that lost to Croatia in the 2018 World Cup semifinals.

“In Russia, it was more like could we just win one knockout game, but there’s more confidence now.

“We have more experience, I’m not sure if we’re ahead of where we were [at the Euros]. But we have achieved our first objective.

“Against Senegal, who have some top players playing in big leagues across Europe, we know on the rankings we will be favourites but they are a very dangerous team.”