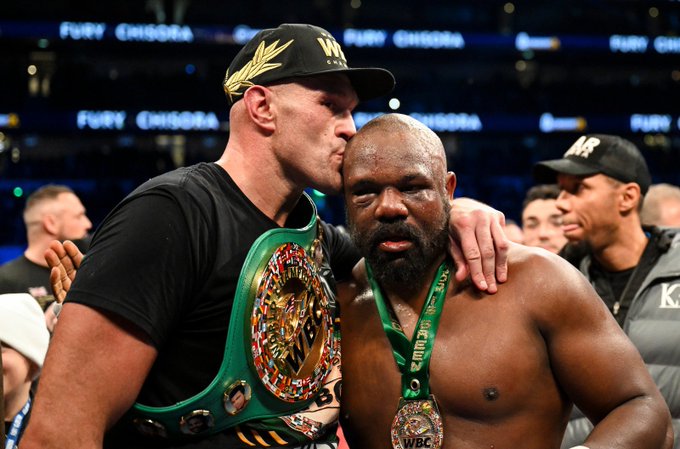 With Fury, who is still unbeaten as a professional, in charge from the first bell, the outcome was hardly in doubt.

Nine seconds before the completion of the tenth round at Tottenham Hotspur Stadium, referee Victor Loughlin stopped the bout after Chisora’s eyes began to close.

A unification fight between Fury and Usyk, the IBF, WBA, and WBO heavyweight champions, was made possible by Fury’s most recent victory.

Usyk was in attendance on Saturday as he made his way back to the arena where, in September of last year, he stripped Britain’s Anthony Joshua of all those belts before defeating him once more in Jeddah in July of this year.

And soon after a convincing victory, Fury and Usyk squared up as the Ukrainian entered the ring.

After thanking the approximately 60 000 spectators present and leading them in a chant of “One Derek Chisora,” Fury turned his attention to Usyk as British heavyweight Joe Joyce also entered the ring.

After his victory, Fury wasted no time in calling out Ukrainian, Oleksandr Usyk for a unification bout.

Usyk remained silent, with Chisora adding: “Thank you Tyson, I really appreciate that. We are friends.

“There’s a big fight coming, everyone wants to see one champion in the heavyweight division.”

Fury, meanwhile, then turned his attention to Joyce.

Joyce added: “I’ll take either. Like Fury was saying, if not Usyk then me.”

Fury’s only previous fight this year was a sixth-round stoppage of Dillian Whyte at Wembley in April.

“I felt good, I needed some rounds, I haven’t boxed since April,” said Fury. “I was landing good punches. But take nothing from Del Boy (Chisora), it was a pleasure to fight tonight, he is a British folk hero.”

After the fight with Whyte, Fury declared his retirement, but it turned out that the allure of the ring was too much.

Fans want to see a fight with Usyk, as opposed to the highly anticipated “Battle of Britain” between Fury and Joshua, which was called off after negotiations between the two camps broke down.