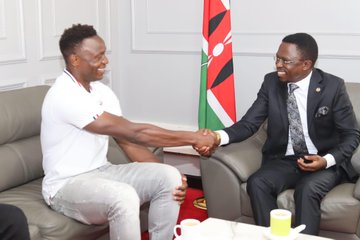 Victor Wanyama, a former football captain for Kenya, announced his decision to rejoin the national team just over a year after declaring his retirement from international competition.

After meeting with Kenya’s Sports Minister Ababu Namwamba on Wednesday, the 31-year-old former Tottenham midfielder revealed he had made up his mind to rejoin the Harambee Stars.

“I am glad to announce that I have accepted the minister’s invitation to return to Harambee Stars,” Wanyama said.

His decision comes after FIFA lifted its embargo on Kenya’s national football federation, which the government just reestablished after it was abolished due to suspicions of corruption.

“I believe we all have a role to play and take Kenyan football forward after the return to international football,” Wanyama said.

In September 2021, the seasoned skipper had announced his retirement.

Namwamba praised Wanyama’s entrance back into the squad, tweeting:

“In our mission to rebuild our football and elevate our national teams, our elite players must be at the heart of this renaissance.”

The first football player from Kenya to play in the English Premier League is Wanyama.

He previously worked for Southampton and Celtic before transferring for free to Major League Soccer club Montreal in March 2020.