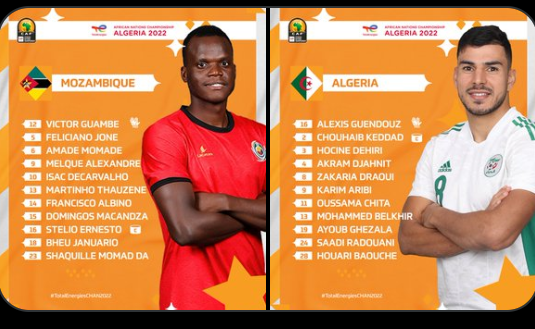 The third round of the African Nations Championship CHAN 2022 will include a match between the teams of Mozambique and Algeria on Saturday at the Nelson Mandela Stadium in Baraki.

Mozambique is ranked second in Group A with four points, while Algeria is in first place with six.

Mozambique’s most recent game was a 3:2 home victory against Libya in the African Nations Championship on January 17.

They have gone without a loss in two straight games, winning one and drawing the other. During Mozambique’s last 10 matches, playing at home was a game-changer.

Tuesday’s match between Algeria and Ethiopia ended with a 1:0 Algerian victory at home.

The team is currently enjoying a run of two straight victories.

In Algeria’s most recent ten matches, playing on home soil proved to be less significant than playing on the road, with the hosts winning on six occasions and the visitors winning on three.

How both teams line up