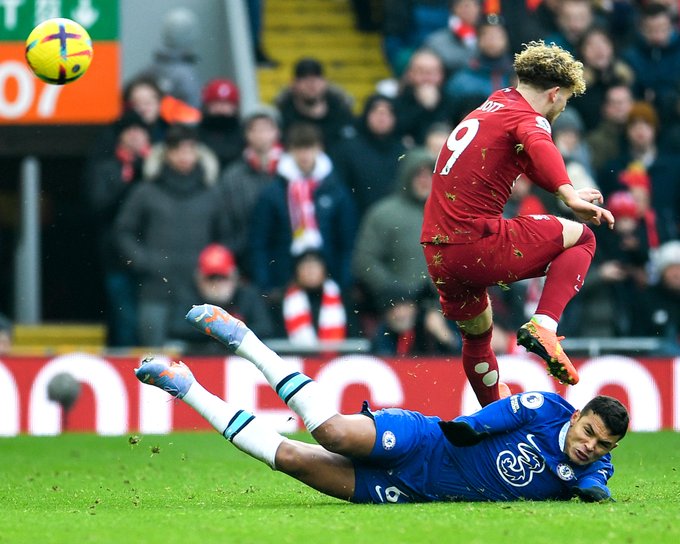 An underwhelming 0-0 stalemate in the Premier League on Saturday at Anfield saw injury-plagued mid-table rivals Liverpool and Chelsea continue their poor seasons.

Kai Havertz’s close-range goal following a corner appeared to have put Chelsea ahead in the third minute, but VAR determined the German was offside.

In an effort to avoid three straight league losses, Liverpool appeared to be lacking confidence as they only created half-chances, with new signing Cody Gakpo missing the best of them in the first half. This was manager Juergen Klopp’s 1,000th game in charge.

Read Also:Not the player we need – Chelsea told to get rid of Aubameyang

Mykhailo Mudryk, a high-profile January acquisition for the visitors, was brought on in the second half, but while seeming spirited, the Ukrainian was unable to inspire the Blues, who secured a point to move up to 10th place and tie Liverpool in eighth place on 29 points.

With Chelsea having played 20 games compared to Liverpool’s 19, both teams are nine points out of the top four.
“I thought the performance was good,” Chelsea boss Graham Potter told BT Sport. “I am happy with the team, the energy, what we tried to do.

“At Anfield, it is always tough. It is a clean sheet and a point, we move forward. Overall, a positive day, apart from the fact we wanted three points.”

Despite Klopp claiming that Liverpool’s most recent 3-0 defeat to Brighton & Hove Albion was the worst of his career at Anfield, things did not get any better against Chelsea.

When Havertz scored at Anfield from close range, the home team appeared to be facing another uphill battle. However, after a thorough VAR review, the German was determined to be offside.

Benoit Badiashile, a defender who joined Chelsea in January, headed from close range too close to goalkeeper Alisson, preventing Chelsea from taking the lead into halftime.

A draw was a fair outcome despite Liverpool’s substitute Darwin Nunez coming close, Mudryk’s frantic run ending with a shot into the side netting, and Carney Chukwuemeka’s missed late opportunity for the Blues.

Liverpool has lost all three of its most recent Premier League contests, and this is the first time since March 2021 against Fulham and Chelsea that they have gone two games without scoring.

“When you’re in a tough period and a tough moment in the team, I think it’s important that you stick together and fight for those clean sheets and that’s where it starts,” Liverpool’s James Milner told BT Sport.

“It’s not the best football matches that we are playing but it’s small steps to get where we know we can be.”