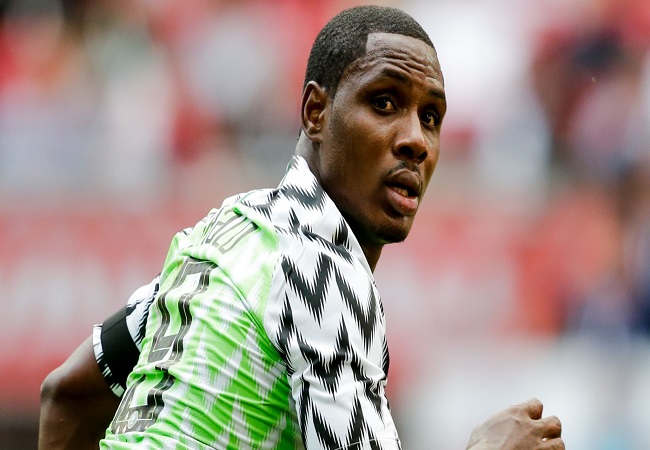 Odion Ighalo is considering a return to the Super Eagles. AFCON 2019 highest goals scorer and Manchester United on loan striker avails himself if the Gernot Rohr led coaching crew deems it necessary to extend invite to him.

The former Watford striker told ESPN that he still maintains good communication with Rohr who wanted him to return to the team shortly after his big 2019 winter deadline day transfer move from China’s Shanghai Shenhua to Manchester United on loan.

“I have good relationship with Rohr and at a time he wanted me to return to the team. Because he finds it difficult to see me play for Manchester United and not in his Super Eagles squad.

“Although I retired from the team very early due to injury before the AFCON and unfortunately, I left the tournament with another injury. Considering that travels between China Nigeria weren’t too good for me, I had to to look at other options to save my club career and give younger players the chance to also show their stuffs.

“I miss everyone in the team. And if the need arises, I will want to play at another World Cup finals or the Africa Cup of Nations. But for now, I want the young lads in the team to enjoy themselves.” Observed Ighalo.

Meanwhile, with Ighalo’s loan spell at Old Trafford coming to an end this January ending, the Nigerian star told ESPN that he is yet to make a decision on his future although speculations are rife he’s considering moving to US’s MLS.

“Today, I’m in Manchester. But at the end of the month I don’t know where I’m going to be.” Ighalo told ESPN. “If it’s possible I’d like to stay here. But if not I have to go.

“I have options. I wait for my agent. He is doing his job. And I’m doing mine. At the end of the month, we have to decide what is best. And we’ll take it. If it’s possible I’d like to play in MLS. But I have to wait to see if it’s possible.

“The league is doing well. And if the opportunity arises then I’d grab it with two hands.” He said.

In the finals days of his loan spell at Manchester United, things have not been rosy for the Nigerian. This was following the arrival of Uruguay star, Edinson Cavani last summer.

But if Ighalo leaves at the end of the month, the 31-year-old said he will do so having fulfilled his dream of playing for the team he supported as a kid in Lagos.

“I never believed I’d play for United.” He said. “Where I come from, we fight because of United games.

“We quarrel. We argue. When my team hasn’t done well, I cried. I grew my love for United since I was young. And I’m the happiest man on earth for my dream to come true. I’ve fulfilled my dream to play for Man United.” Ighalo concluded