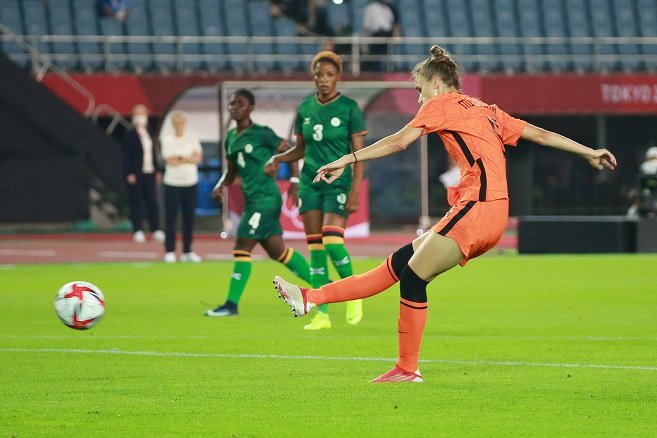 Striker Barbara Banda’s hat-trick was not enough to save Zambia’s Copper Queens from suffering a 10-3 loss to Vivien Miedema-inspired Netherlands on Wednesday afternoon.

The Group F match of the Tokyo 2020 Olympic Games took place at Miyagi Stadium in Japan where Miedema scored an awesome four goals.

It took barely 10 minutes into the game for Netherlands to open the floodgates.

Miedema scored into an empty net after Zambia goalkeeper Hazel Nali came off her line hurriedly and made a complete mess of her run.

Lieke Martens added the second goal for Netherlands after Nali had parried Miedema’s initial attempt in the 13th minute.

Banda pulled one back for Zambia when Lungu set her through to slot the ball after getting past Netherlands goalkeeper in the 19th minute.

Zambia managed to keep it tight but only for six minute before conceding again through Danielle Van de Donk’s effort.

Hopes of Zambia coming back were dashed when Miedema grabbed her hat-trick on the half-hour mark after receiving a square ball from Van de Donk wide on the left wing.

Eight minutes later, Netherlands added the game’s fifth goal through Martens’ long range shot which gave Nali no chance, before  Van de Sanden wrapped up the half with a simple tap-in.

Thereafter, Banda took matters into her personal hands when she bagged her hat-trick after scoring in the 82nd and 83rd minutes.

In the end, Zambia coach Bruce Mwape left the field of play with plenty of home work to do whereas it was all smiles for his opposite number Sarina Wiegman of Netherlands.