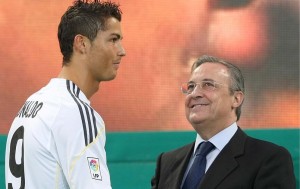 Rumors have announced his return to Old Traford or a possible departure to Parc des Princes and a possible arrival on the Rock in Monaco.

Obviously Cristiano Ronaldo is away from all these destinations. The Portuguese striker of Real seems to stay very long in the Spanish capital. In any case, it is the wish of Florentino Perez, president of the Casa Blanca.

In an interview with the U.S. television for the Spanish community, Univision, the leader of the Merengue has raised the case of Ronaldo. Everything seems to indicate that the Portuguese will extend his contract with Real.

And Florentino Perez would consider making the striker sign a lifetime contract.
“Cristiano Ronaldo really wants to retire at Real Madrid and Real Madrid hope he retires here as Zidane and other great players have done in the past. Be absolutely certain that he will end with us. “