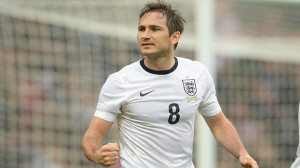 Chelsea and England central midfielder Frank Lampard has admitted that the the World cup qualify against Ukraine will be a tough game as the Ukrainians may come into the game to seek revenge for their Euro 2012 defeat to England. Lampard believe that will not be a major factor.
England beat the tournament co-hosts 1-0 in Donetsk last June, Wayne Rooney with the goal while Ukraine were aggrieved to be denied an equaliser when Marko Devic’s shot appeared to cross the line before John Terry cleared. The two teams previously met in the current qualifying World cup campaign where Lampard’s late penalty earn a 1-1 draw for the three lions deepening the sense of frustration within the Ukranians.
According to Lampard, he has watched the last summer game and it was tough but he believe tuesday’s game will be a different game. England lead the group on goal difference from Montenegro, with Ukraine only a point behind and Poland also within striking distance. And Lampard, who is set to win his 100th England cap tomorrow, said: “We were very aware it was a tough group from the outset”.